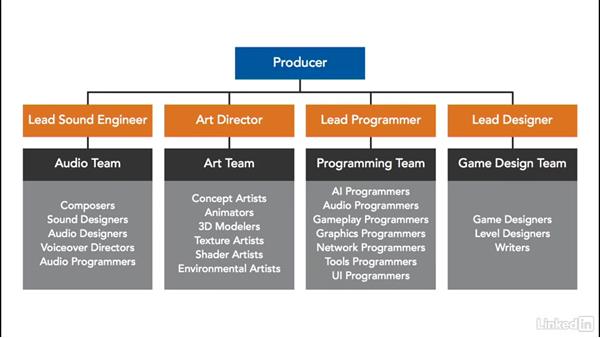 A game development studio is where all the action happens in making a video game. Artists, Programmers, Audio Engineers, and Designers communicate and team up to build the exciting, engaging games players are eagerly anticipating. In this video we'll take a look at the structure of the modern game development studio

- [Voiceover] Let's look at how a game studio is structured. We'll examine who reports to who, and who the people are that make the decisions concerning the game's style and design. A studio is mostly made up of artists, programmers, designers and other production specialists. These specialists can be divided into smaller groups that focus on other responsibilities. Each of these teams can contain a lot of people, depending on the style and scope of the game being produced. On these teams you can expect to find generalists, as well as specialized team members in each discipline.

For instance, the art team may contain animators, modelers, and shader artists, who work together to produce environments and art for the game. Each of those teams reports to a lead or director, who oversees the scheduling, quality, and cohesiveness of the assets being produced by their team. A lead's job is a busy one, as their responsibilities may overlap with other departments. For instance, the lead programming engineer not only oversees the code and scripts that control gameplay, but also works closely with the marketing department to ensure that special features of the game are properly presented to their publisher and/or distributors.

Leads will report to a producer, whose responsibilities include making sure schedules are aligned with the release and deadline dates, and ensuring the gameplay art, sound, and UI elements are cohesive. A big part of a producer's role includes staying in touch with player expectations and ensuring that marketing efforts are reaching the correct audience. The producer reports to the studio head. This may be the owner of the studio or a CEO. Game studios are like many other companies and will have other teams helping to run that business.

This includes teams like HR, IT and administrative services, who recruit and hire new employees, ensure equipment and networks are running smoothly, and oversee the daily office chores that keep a company running smoothly. In some cases, a company may have support teams involved in production that aren't controlled by the company. These contractors supply additional art, code, sound, or specialized services, such as motion capture or cutscenes videos, to the continued production of the game.

As you can see, the modern game studio can be an active, crowded place. All these teams need to communicate daily and work in unison to produce an expensive, complex, and extremely specialized product that will engage and excite the players of their game. 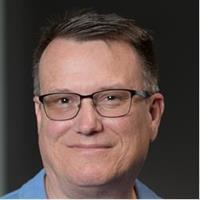