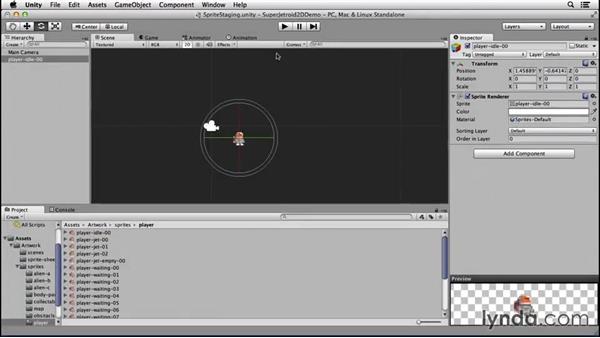 Learn how to build a 2D game with players, obstacles, formidable enemies, and multiple levels with Unity.

[Voiceover] Hi. My name is Jesse Freeman, and welcome to Unity 4 2D Essential Training. This course was designed for people who are new to Unity with a background or an interest in making 2D games. Our goal is to build reusable game components that will not only help you build this game, but also allow you to reuse them in future games moving forward. In this course, we'll cover the following things. Working with 2D sprites in Unity, including how to import our artwork, how to create animations, and how to link the animations together.

We'll create a player and how to control the player. We'll make obstacles, such as push blocks, switches, and doors, and how to link them together. And of course we'll build out enemies with basic AI. We'll build a level and we'll also add lighting effects to that level. We'll create multiple scenes and manage switching between them. And finally, we'll cover an overview of how to actually publish your game. I hope you're ready. Let's get started.