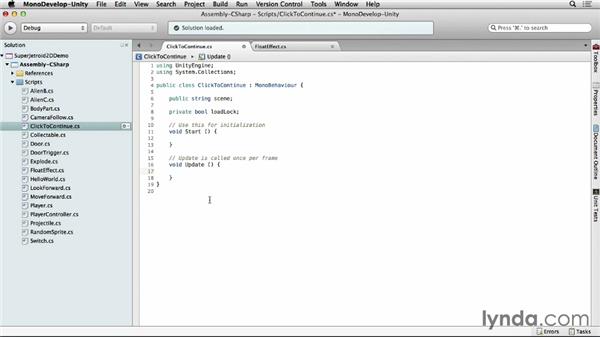 Join Jesse Freeman for an in-depth discussion in this video Switching between scenes, part of Unity 4: 2D Essential Training.

So now that we have our splash screen, we're ready…to go from the splash screen into the game itself.…In order to do this we're going to have to add each of the scenes into the…build and also create a script that can…switch between the scenes we've added to the build.…Let's go into the file menu and go into build settings.…From here, you'll see Scenes in Build, simply click Add…Current and it'll add the scene that you're currently in.…Next, let's go into scene, games and load up level one in the background.…

We'll also want to add that as well.…So scene zero is going to be our splash and scene one is going to be level one.…We can now close this menu, go back into our splash screen…and start writing the code we need to switch between the scenes.…Let's go into scripts, create a new script and call this one click to continue.…We'll open it up in mono develop and add in our code.…Now let's select the click to continue script.…From here, we're going to create a public property that…will store the scene name that we want to transition into.…