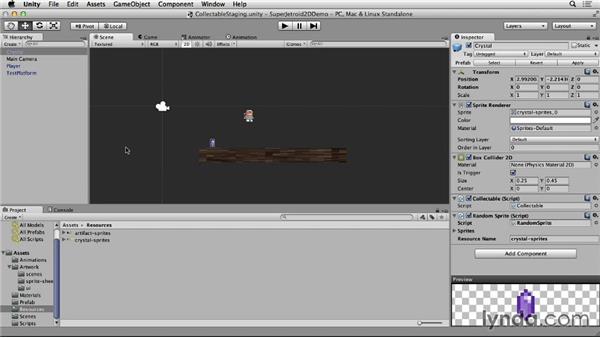 …So going back into our sprite sheet folder, you may have…noticed that we have several different…sprites representing different types of crystals.…What we're going to set up is a way for the crystal to…randomly choose a sprite to display when it gets substantiated in the scene.…In order to do that, though, we're going…to have to create a new folder called resources.…Let's create this, and from there we're going to drag…the crystal sprites and the artifact sprites into the resource folder.…The resource folder is a special folder inside of Unity that lets…the ID know that these are things that'll be loaded at runtime.…

Now, let's make a new script called random sprite.…We'll go into our script folder.…And select new C sharp script.…Let's double click, and go back into the editor.…We're going to set up two properties: an array…for sprites, and a string for the resource name.…The sprites array will contain all of the sprites…that we load up dynamically from the resources folder.…The resource name will be the name of the file…