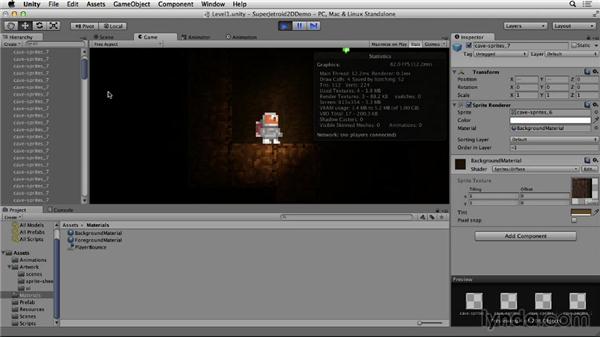 …Now that we have everything laid out in our scene, let's…take a look at how we can add some lighting effects,…to take the rather flat pixel art that we have here,…and make it look a lot more dynamic, and pop out.…To get started, we're going to go to the hierarchy menu, and create a point light.…Next, we're going to drag the point light into…the player object in order to nest it.…Then, we'll set the position X and Y to 0, 0.…From here, we're going to change the range to four, and the intensity to three.…

Also, we're going to change the render mode from Auto to Not Important.…This'll help minimize the amount of draw calls that…your game is making, trying to render the lights.…A little bit later on when we have lighting fully working,…I'll show you the difference, and what the performance impact would be.…Now, if we were to run our game,…you'll see that no lighting effects is taking place.…And that's because we need to apply materials to each of our…tiles, that'll tell the rendering engine how to be affected by the light.…