Keeping aliens on the platform 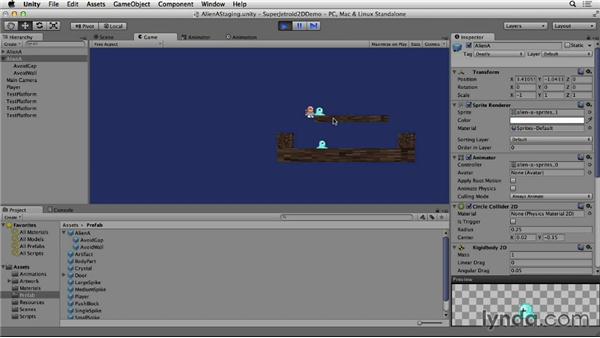 …So at this point, our alien will now look for walls and…once it hits a wall, turn around and go the opposite direction.…But what happens if we put this alien in on a platform?…If we copy out one of these little platforms, and stretch it out.…We'll also copy and put a new alien on top of it.…We'll move him near the edge so we can make this test run a little faster.…Here if we play, the alien is going to look for the edge of the…wall but there is no wall so he's just going to float down and fall.…

We can fix this really easily, let's go inside of…the look forward script and we'll make a few modifications.…Let's make a new public boolean called needs collision.…And we're going to set this to true by default.…If you think about it, what we're actually looking for as we're…walking around is whether the line of sight collides with another object.…But what we're actually looking for in a…platform is whether there isn't a collision at all.…

In this case, we can simply change the collision test…to make sure that it actually needs a collision to happen.…

Video: Keeping aliens on the platform