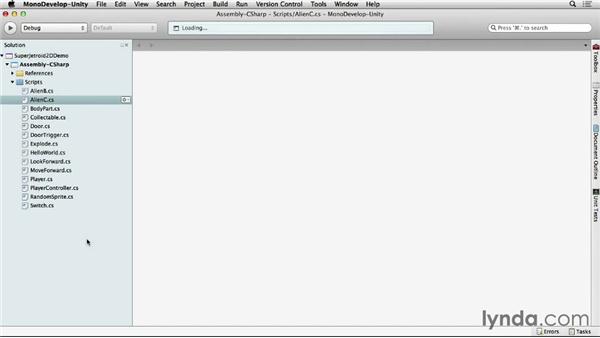 Join Jesse Freeman for an in-depth discussion in this video Enabling aliens to shoot, part of Unity 4: 2D Essential Training.

…So, at this point we've created an alien that…will attack the player, if the player gets too close.…Let's create a new alien that will fire a projectile.…In order to do this we're going to create a new…scene, and we're going to call this scene, Alien C staging.…We'll put this inside of our scene folder.…And in our prefabs, let's drag a test platform into the scene.…We'll then go into our spreadsheet folder.…We'll look for aliens C, and we're going to…drag spreads zero through three into the scene.…

From here, we'll call this…AlienCAttackAnimation.…And make sure that this goes inside of our animations folder.…While we still have this selected, let's go into…the Animations tab, and create a new animation state.…We'll call this AlienCIdleAnimation, again making sure…that it goes inside of the animation folder.…We're going to want to change the sample rate to 12, and…we'll drag the first frame of aliens C, into the timeline.…Let's hit Save to save the animations, and go into the animator.…

We'll select our alien and make idle the default animation.…