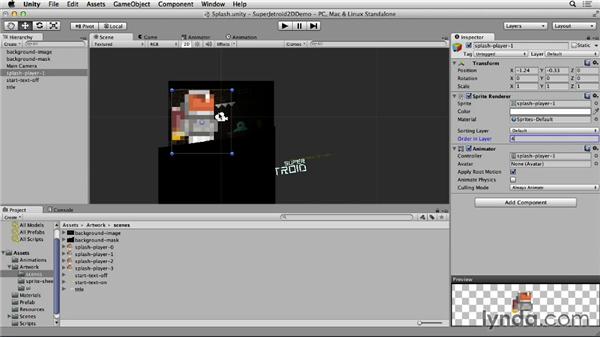 Join Jesse Freeman for an in-depth discussion in this video Creating a splash screen, part of Unity 4: 2D Essential Training.

…So now we have an almost complete game, we have sound effects, we have all the…artwork in place, we have all the objects…to build levels and we have a single level.…Next, we're going to create a splash screen and then start…talking about how to link and switch between different scenes.…Before we do this, let's do a little…bit of organization inside of our scene folder.…Create a new folder called Staging.…And we're going to select all the scenes we've created so far, with the exception…of Level1 and the folder we just created, and drag those scenes into Staging.…

Next we'll create a new folder, and we'll call this Game.…Here we'll drag our level into the Game folder.…Now let's create a new scene.…And we're going to call this scene, Splash, and…we'll put this inside of the scene's Game folder.…Let's zoom in a little bit…and go into the artwork scene's folder, from…here we're going need to create two new animations.…We'll select all of the splash player sprites,…drag them into the scene and call this splash…player animation.…