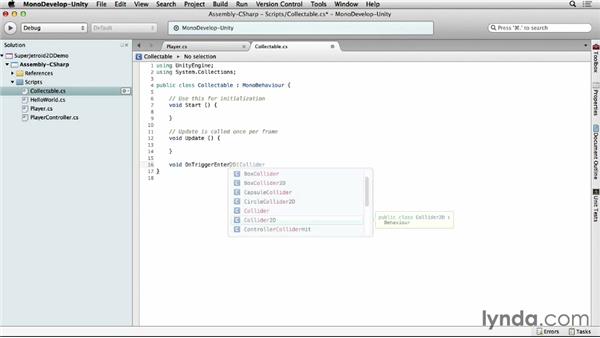 …So now we're ready to build items that the player can pick up.…Let's create a new scene and we're going to call this scene collectible staging.…Make sure that we save it in our scenes folder and we're going to drag our…test platform pre fab and our player pre fab into the scene, and hit Save.…Let's go into our Artwork > Sprite-sheets.…Zoom in a little, and take a look now at our crystals.…We're going to drag the first crystal onto the scene, and rename this to Crystal.…

From here, we're going to add a box collider 2D and set it to trigger.…What this tells the engine is that this object isn't solid but in fact…is looking for when another collider enters…its space and it will call trigger method.…To see how this works, we're going to add a…script that allow us to capture the trigger event.…Let's go into our scripts folder and create a new C# script called collectible.…We'll open this up and start adding some code.…