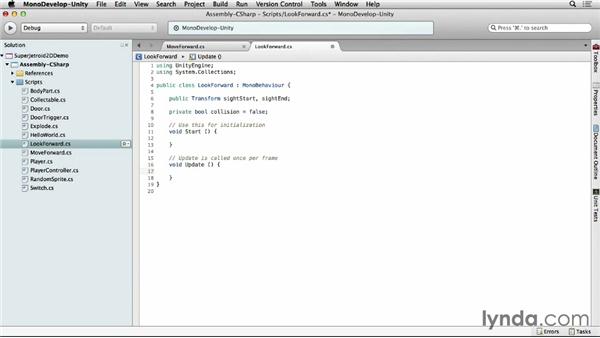 Join Jesse Freeman for an in-depth discussion in this video Creating aliens that walk, part of Unity 4: 2D Essential Training.

…So now that we've created all the objects we'll need for…our game, it's time for us to start looking into building aliens.…To get started, we'll make a new scene and we're going to save this as AlienAStaging.…This will also go into our Scenes folder, and…this time we're going to do things a little different.…While we're still going to drag down our test platform, we're…actually going to leave our player out of it this time.…The one thing that we will do, is drag in another test platform.…And we're going to resize this by holding down Shift and dragging…at the edges, and we're going to create two walls on either side.…

We can copy this, and paste it, and drag it over here.…The plan is to test, as we build out our alien, that it will be able to walk…between these two walls, and as soon as it…hits a wall, turn around and go the opposite way.…Let's create our alien.…We'll go into our Sprite sheets, and AlienA.…And select all the frames of animation, dragging them to the scene.…We'll call this AlienA Animation.…