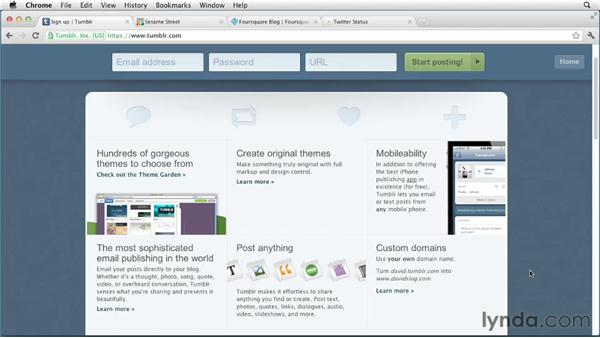 Join Justin Seeley for an in-depth discussion in this video What is Tumblr?, part of Tumblr Quick Start.

Before we get going with Tumblr, you may want to know exactly what Tumblr is, what it does, and why you would want to use it. In this movie, we'll be exploring tumblr. com, and exactly how it can help you get yourself on the Web quickly and easily. When you access tumblr.com for the first time, you'll be brought here to the home screen. On the home screen, you're able to sign up for a new account, or explore a little bit. Let's take a moment to explore. Here towards the bottom, you'll see something that's called 30 reasons you'll love Tumblr. By clicking this, the Web site shifts, and allows you to see various parts and pieces of tumblr.com that make it a unique experience.

First of all, Tumblr does come with themes, so much like other CMS systems, like WordPress, or Drupal, you can instantly change the look and feel of your Tumblr site by adding a new theme. Tumblr also allows you to post on the go with their mobile apps for tablets and smartphones. This is pretty cool, because Tumblr acts almost like a real-time log of your life; you can post anything to Tumblr, from text, quotes, images, videos, URLs; anything you see in life that you think is cool, you can post it to Tumblr, and Tumblr logs it for you. That's the cool part about it.

It's also a great way to get yourself online as quick as possible, and start producing content. It might not be Pulitzer Prize winning material, like you'd post to a WordPress blog, but Tumblr is fun, it's social, and it's not meant to be a full-blown CMS. You'll also notice, towards the bottom here, that you can create things like Photosets. Photosets allow you to create almost like a pseudo-gallery type thing here inside of Tumblr. I'll explore the Photoset feature in a future movie, but just know, this is a great way to showcase photography, design work, or anything else that you might be wanting to showcase.

You can also see that they've included stuff like Bookmarklets, Google optimized pages, analytics, and of course, the ever popular automatic tweet. So now that we have a better understanding of exactly what tumblr.com is, and what it does for us here on the Web, we're ready to start taking a look at who is using it, and some of the creative ways that they're making Tumblr integrate with their online presences.

2/16/2012
In this course, author Justin Seeley shows how to share content quickly and easily using the Tumblr microblogging platform. The course walks through creating an account, setting preferences, choosing a theme, and adding Facebook and Twitter integration, as well as creating audio, video, and text posts; building custom themes with CSS and HTML; and publishing posts remotely. The course also covers working with pages, creating page templates, and tracking blog traffic with Google Analytics.
Topics include:

Video: What is Tumblr?