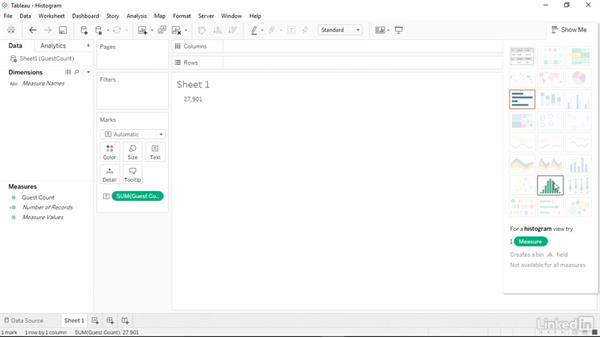 Analyzing individual values, such as the largest sales day for a month, provides terrific insights into your business. Another way to visualize your data is to separate it into bins. For example, you might want to know how many days had less than $1,000 in sales, how many between $1,000 and $2,000, and so on. In this movie, I’ll show you how to visualize data in this manner by using histograms.

- [Narrator] When you analyze values in Tableau you will often look for specific values, such as the number of guests in your hotel on a particular day. However, if you want to look at overall patterns of data there are many ways to do that, but one great way is to create what is called a histogram. A histogram is a vertical bar chart or column chart that shows how often that you get measurements within specific ranges of values, also called bins.

In this movie, I will show you how to create a histogram. My sample file is the histogram workbook, which you can find in the chapter ten folder of your exercise files collections. To create a histogram you only need one value, and that is a measure, which in this case, is called guest count. My guess count is the number of guests that are present in my hotel on a particular day. So I'm not looking at dates. I don't care about the values in any specific dates.

Instead what I want to know is how often my guest count falls within a certain range, and I can discover that by creating a histogram. First thing I'll do is I will drag the guest count measure to the data area in the middle of the visualization. And I see my sum is 27,901. To create the histogram I will go to the toolbar and click the show me button. And on the next to last row I see that the histogram button is highlighted so I'll click that.

And I'll hide show me by clicking its title bar, and I can see the distribution for each of these bins. Tableau created the bins for me so I didn't have to worry about that. And I see that I had 14 occurrences where I had between 286 and 299 guests. So 286 to one less than 299, which is 298. I can tell the range of a bin by hovering my mouse pointer over a particular bar, so let's say I'll go to this one here with a count of 12.

I see that it starts at 245, which checks out visually with the x-axis or horizontal axis. And if I move over to the right, and hover over the next one, I see it starts at 258, so the last value in the previous bin and the one to the left is 257. And I can do the same for other values. Now I can perform a visual evaluation of the data. I see that I have a lot of visitors between about say 250 and maybe 340, that seems to be the center of the curve.

And visitor counts under 200 and greater than about 370 are pretty rare. I only have about 100 observations in this group, so I would probably want to evaluate my visitor counts over a longer period of time so that I could get a better idea of what the data actually looks like.