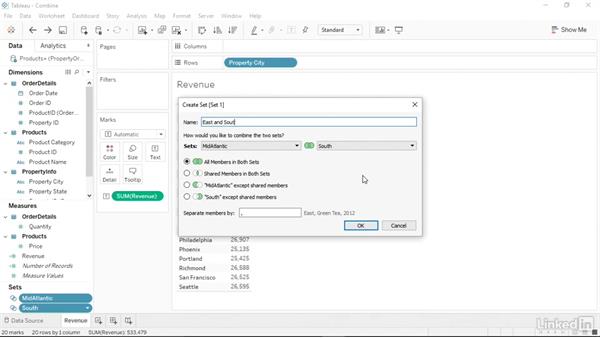 When you define a set within your data, you identify a number of values that have something in common. If you have customers in the eastern United States, you could have an east or mid-Atlantic region, for example. After a while, you might decide to combine two or more sets into a single set. In this movie, I’ll show you how to do that.

- [Instructor] When you define a set within your data you identify a number of values that have something in common. If you own properties within the eastern United States, for example, you could have an east or perhaps mid-Atlantic region. After a while, you might decide to combine two or more sets into a single set, and in this movie, I will show you how to do that. My sample file is the Combine Tableau workbook and you can find it in the chapter seven folder of the ester size files collection. I'm summarizing hotel data based on the property city and also the revenue that each of the hotels brought in.

If you look over in the data tab, you can see at the bottom that I have two sets defined, MidAtlantic and South. MidAtlantic, if I double-click it, consists of Boston, New York and Philadelphia, and I'll press control-Z to undo that. Whereas the South, if I double-click it, consists of Atlanta and Nashville and New Orleans, Orlando and Richmond, and I'll press control-Z again to undo.

Let's say I want to combine my two sets into a single set. To do that, I can click the first set in the sets area and then hold down the control key and click the second set, then right-click either of these selections and from the shortcut menu that appears, click Create Combined Set. There I have the Create Set dialogue box and I can call this set something other than Set 1, so I'll call it East and South.

The first thing I need to do is to indicate the two sets that I want to use or more but in this case, it's two, and I have MidAtlantic and South, which are correct. Now I need to identify how I want to combine the two sets. The first is simply to combine all members in both sets, regardless of overlap. The second option is to create a new set with only the shared members. In other words, groups or rather cities that would be in both MidAtlantic and South in case there are none of those.

The third option is MidAtlantic except for shared members so it would be every value in MidAtlantic unless that value is also in the South. And then we have South except for shared members and that's the opposite of MidAtlantic. It would take every value in the South group or set unless it was also in the MidAtlantic set. If the two sets summarize different dimensions, for example, state versus city, then you could have Tableau separate the members using a comma, and you can see here that there's East comma Green Tea comma 2012.

You can use any character that you like or no character at all. Now that I have created my set, I can click OK and you see that it appears here, East and South, and if I double-click then it's added to the right of Property City and we can see in and out. If I get rid of Property City, then double-click it again to bring it back, then I see my list or my text table with all the cities that are in the East and South set and all the ones that are not.

If I want to remove that level of organization, I can drag the pill to the data area and my text table goes back.