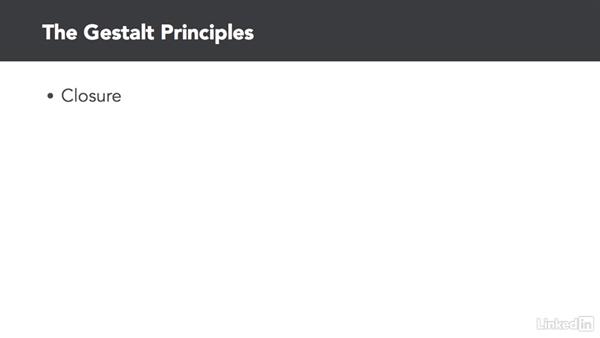 The Gestalt theory is a group of principles related to visual perception. in this movie, you learn each of the Gestalt principles and their relevant important to quality visual design in elearning courses.

- [Instructor] In this chapter we're going to focus on getting a good understanding of visual design. Principles before we can apply those principles to the elearning courses we create in Storyline 2. We're going to start with a very important set of principles known as the Gestalt Principles. Gestalt literally means unified whole and refers to the theories of visual perception evolved by German psychologists back in the 1920s. These theories depict how people tend to organize visual elements into groups, or unify wholes when certain principles are applied.

So what are these principles? Well the first is similarity. Similarity occurs when a group of individual objects look similar to one another causing people to perceive them as a single object or pattern. Now this example containing nine separate and different distinct objects appears as a single unit because all of the shapes have similarity. Unity occurs because the star shape that makes up the lower half of the human symbol looks similar to the star shapes that form the circle.

So why is similarity important in visual design? Because you can really emphasize something by making it dissimilar, also known as anomaly. In this example the figure on the far right becomes the focal point because its dissimilar to the other three shapes that we see on this slide. The next principle is the principle of continuation. Continuation happens when the viewer's eye is compelled to move through one object and continue to another object like how the viewer's eye will naturally follow this smooth, flowing line through the middle of the A frame leading the eye directly to the rows.

Next, we have closure which occurs when an object is not complete or not fully enclosed. If enough of the object is displayed, people will actually perceive the whole object by filling in the missing information. Although the triangle in this graphic is not complete, enough is there for your eye to complete the shape which is what we call closure. Another of the Gestalt Principles is proximity. An important one we'll spend some time with in Storyline 2 later in this chapter.

Proximity is simply the placement of multiple objects close enough together that they are perceived as one object. Check out these triangles. Now to the eye, there appears to be eight separate objects. But when we put the in close proximity to one another arranged in a circle, unity occurs and suddenly the eye perceives a single object, a sun. Now we still have eight separate objects. Yet, now they area perceived as one group. You can see how important the placement of objects on a slide in Storyline 2 would be to our viewers when we begin to create our elearning courses.

The last Gestalt Principle to remember is figure and ground, where the eye differentiates an object from its surrounding area. In elearning, the easier we make this on the eye through proper balance of figure and ground, the clearer our message will come through. In this first example the word elearning is clearly perceived as figure and the surrounding black area ground. Very nice. Things get more complicated in this second example where the eye can perceive more than one figure, and more than one ground, flipping back and forth in this case between a vase and two silhouettes of a face.

It's a cool effect or illusion but the complex relationship between figure and ground could be confusing to the viewer and that's something we want to avoid in an elearning course we might create. So as we move on to Storyline 2 now, we'll want to keep these principles in mind during the creation process.

11/15/2016
Learn how to design effective slides that enhance the learning experience of your audience with Articulate Storyline 2. In this course, David Rivers explores some design basics for creating Storyline presentations. He explores topics such as the use of color, contrast, and repetition; Gestalt theory; formatting text for readability and accessibility; incorporating media; and creating stories through visual design. Plus, learn the top 5 mistakes to avoid and the top 5 habits to embrace when it comes to visual design.
Topics include: