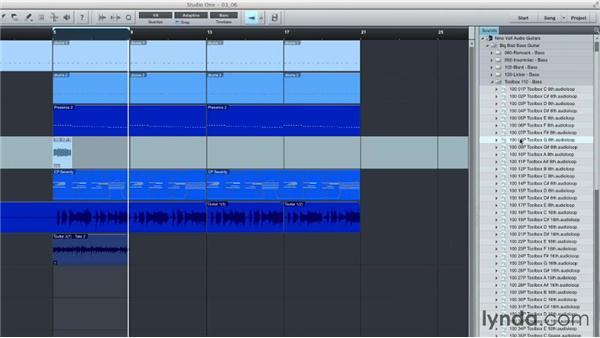 Join Josh Harris for an in-depth discussion in this video Arranging bundled content, part of Learning Studio One.

Now that we've covered some of Studio One's basic features, it's time to dive a little bit deeper into the bundled content to begin building out our track. I'll begin by looking at the big bad bass guitar folder. And as you notice, there's a folder called Toolbox 110 base, what this collection is is a series of eighth note patterns played on the bass in every key. I can audition these by highlighting the track, and clicking play down here at the bottom of the browser. (MUSIC) . And that's my 8th note bass pattern in the key of C.

If I click on F, the same patter in the key of F. (MUSIC) Now, before I drag these onto the Arrange window, I'm going to mute out some of the guitar parts, and just take a listen to my keyboard part, with the drums. (MUSIC) I'm dealing with a four-bar pattern. So, the present's base sounds that I used, so that the guitars were able to be tracked, I'm actually going to replace that with the base loops out of the toolbox folder.

So, I will mute base one. I will begin by dragging in the first loop, which is A, and A corresponds to the first chord change in the four-bar phrase. (SOUND) All I have to do is drag it down here, and I will move this track up underneath bass one. I will also expand its view a little bit. (SOUND) The MIDI notes are changing in the synth base every measure. So I'll need to make an edit on thos bass loop because it's two measures long and I only need one measure.

Use my Knife tool, make my edit point, and delete measure two. I'll go back over to the browser, and I will grab the next chord, which is G. Now all of these bass loops are two measures long, so I'm going to simply edit out measure two of each one. The chord progression is A, G, F, D. Drag over F, spin that a little bit. And as you can see right here at the end of measure 7, the D chord comes before the bar.

So, what I have to do here is change my grid from eighth notes to sixteenth notes. Now I have a finer editing grid. As you can see like I expand a little further I am able to get in right on the node, so I am making the edit point right here at measure eight and I will delete that. Now, I know that I am actually going to need to make the edit point here, but for the sake of dragging in the fourth chord, which is D, I want to place it right on the bar line.

And then I'll zoom in even further, and I'll make another edit point right here, deleting that F and moving the D base loop over one eighth note to start just before measure eight. Now I'll make an edit point at measure nine, and delete the extra audio I don't need. I'll shrink my view, and lets take a listen to the bass line now. (MUSIC) I'll mute the CP70 so we can just listen to bass and drums.

(MUSIC) This is exactly the pattern that I was looking for. And it saved me from having to bring in a bass player to play it. Bundled content can serve as a great way to quickly get a track up and running, and you may even find that these parts wind up in your final mix. 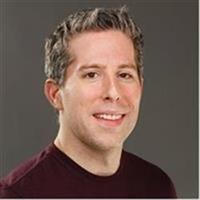 3/25/2013
Start making music with the powerful, intuitive controls in Studio One and these lessons from producer and remixer Josh Harris. Josh begins with a tour of Studio One's Start Page, the creative hub of the program, where you set up your artist profile and audio devices. He then shows you how to set up and start recording a new song, including punching in and using track layers. The course then moves into editing audio and MIDI, where Josh explains the most important of the editing functions: comping, trimming and time stretching audio, quantizing MIDI, and editing MIDI velocities. He also covers mixing with effects and chains, showing how to speed up the process with presets and automation, and explores Studio One's unique feature set used to master your recordings. The course wraps with tips to connect with your audience and share your music with the world, including publishing to SoundCloud, promoting songs on the Nimbit Store, and using PreSonus Exchange.
Topics include: