Where does SpeedGrade fit in a post-production workflow? 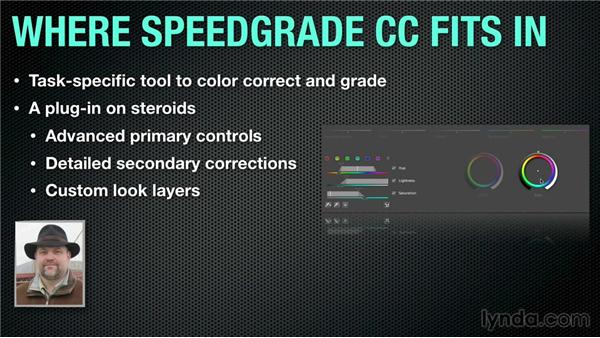 Chances are if your watching this right now you at least have some idea of what Adobe SpeedGrade CC does. In this movie I'm going to present you with what I think are some of the more interesting aspects of Adobe SpeedGrade CC. It is a standalone app and it is part of Adobe's Creative Cloud subscription service, and SpeedGrade CC is in fact, dedicated to the craft of color correction, and in this update, I think it's fair to say that the focus of the team on SpeedGrade CC was to one, streamline the UI, reduce the number of clicks that a colorist has to do in order to access the tools he needs to access.

Second is, a whole new bevy of shot matching tools to take really what is one of the fundamental tasks of any color correction workflow, and that's to help maintain the seamlessness of shots across edits. And finally the third major focus, I think on this update, was the Premiere Pro CC integration. And we'll be talking more about that in a couple of minutes. Now, this app can be used both on set as part of kind of an on set looks creation type of tool. It can be used near set as a dailies generation tool, or it can be used after the editorial process when we've got locked picture and now it's time to take all those shots and turn them into a visual, seamless whole.

SpeedGrade is also a tool that focuses quite a bit on real time performance, it doesn't want you to have to do a lot of rendering. And it also features a very precise color science. The lead developers on this app are very, very dedicated to providing you tools that minimize or eliminate any kind of damage that you might reveal during the color correction process. Now as I said, this is a task-specific tool. It's designed to do one thing and one thing only, color correcting, color grade. Yeah, there's a little bit of like, timeline editing that you can do in here, but it is not an NLE.

It is a dedicated color correction app. I like to think of it as a color correction plugin on steroids. And includes things like primary controls which are on themselves are actually very very powerful. We've got detailed secondary controls in here both keying and using masks and then there's this concept here in SpeedGrade called custom look layers which are themselves customized effects to do a single job. Sometimes, it's a creative effect to create a very specific kind of look.

Other times, it's a utilitarian effect designed to solve a specific problem. And SpeedGrade is also pretty well known for it's ability to accept a wide variety of frame rates, frame sizes, and codecs to plug into just about any work flow you want. And along those lines it's also cross platform. It's both a Mac and PC app. Again allowing you to plug it into whatever kind of pipeline you're working with. Now, SpeedGrade is a layer based color correction app.

That's means if you're used to working with layers say in Photoshop, After Effects, Premiere Pro, you'll be very comfortable with the layer based approach here in SpeedGrade. It features some very extensive grade management tools, some look management tools. It also supports raw camera formats such as ARRI RAW, Red R3D files, as well as log recorded image workflows that you might get out of, say a flat image setting on your DSLR or log images coming off of an ARRI or a Sony camera.

And 32-bit flow processing, well that's kind of like part of the genetic makeup of this app. It is built in from the ground up. Now SpeedGrade itself creates .look files, but what Adobe has done is allowed other creative cloud apps to read those .look files, so you can hand them off. And brand new to SpeedGrade is Lumetri effect. The Lumetri effect is SpeedGrade inside Premier Pro CC. It allows Premiere to read SpeedGrade's .look files and render them using SpeedGrade's render engine from within Premiere.

As we'll see in later chapters, Lumetri is also instrumental in the direct link workflow. What is direct link? SpeedGrade CC in version 7.1 and later, it's able to open up Premiere Pro project files, the actual project files, and pull up any Premiere timeline in those projects, and color correct the shots on those timelines, sending them back to Premiere. Adobe calls that workflow direct link. The key to direct link, it's the Lumetri effect. SpeedGrade's color decisions are embedded inside the Lumetri effect, for Premiere to read and render out.

This is one of a kind timeline integration between an NLE and a color correction app, and it's very, very exciting for creative cloud users. So to wrap up I just want to let you know that Adobe is listening, use the speed grade forums, this is where you can go in and give your product critiques criticisms, ideas about future improvements, you go post in the speed grade forums on Adobe's website and you are absolutely talking to the product development team. This version of SpeedGrade CC we're already starting to see some of the fruits of the SpeedGrade team working within Adobe in order to integrate all this great color signs and bring it to the rest of the creative cloud.

And if you find yourself working in new and diifferent workflows, emerging workflows with different cameras and different codecs. Again let the SpeedGrade development team know. So there it is, my take on some of the most important aspects of Adobe SpeedGrade CC and why I think it's an extremely powerful and very promising app for anyone who's concerned about the quality of their images and the amount of production value up there on the screen for their projects.

Video: Where does SpeedGrade fit in a post-production workflow?