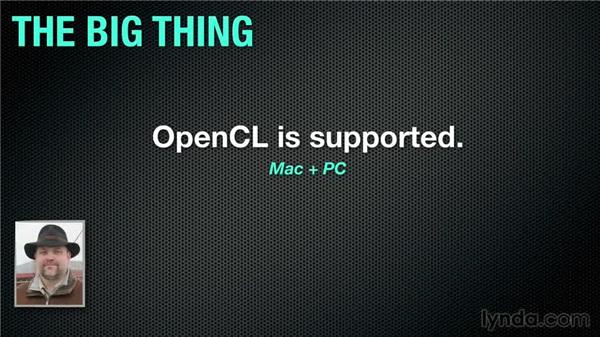 In this movie, I'd like to take a moment to talk about the new SpeedGrade CC 7.2 update. This update has a bunch of bug fixes. These things run anywhere from some problems with flickering on output monitors, some key framing problems, some problems when masking. It also includes brand new codec support for Sony RAW for those you who have been waiting for that, and what I suggest you do, because it's about a dozen different small fixes, I'd go ahead and Goodle SpeedGrade 7.2 Update Release Notes.

Now, the big thing on this release is Direct Link on the Mac. It now works, mostly. And why do I say mostly, because OpenCL is now supported on your GPU card. So, the problem before was direct link on a Mac, instead of doing all of this processing on your graphics card, it was doing it in the host computer. Well, OpenCL is now supported on both the Mac and PC, and it's through this OpenCL support that Direct Link on the Mac is now working.

The reason I say mostly is because CUDA for the Mac, not yet supported. You're not going to see the kind of responsiveness you would expect if you were working in a native .ircp SpeedGrade project. I mean, you're still going to be faster in that native project if you're on an Nvidia card because Nvidia supports CUDA and SpeedGrade has very much been tuned towards CUDA. Also remember that you know, the beefier the card, whether you're on OpenCL or using CUDA, no matter what, the beefier the card, the faster the card, the more VRAM you have, the more responsive SpeedGrade will be.

So this isn't just purely an OpenCL and CUDA thing, it's also, you know, how beefy is your graphics card? Direct Link on a Mac? If you're using Direct Link on a Mac, you need to update to 7.2. Do not sit on 7.1. Alright, so that's my big take away from this SpeedGrade CC 7.2 update.