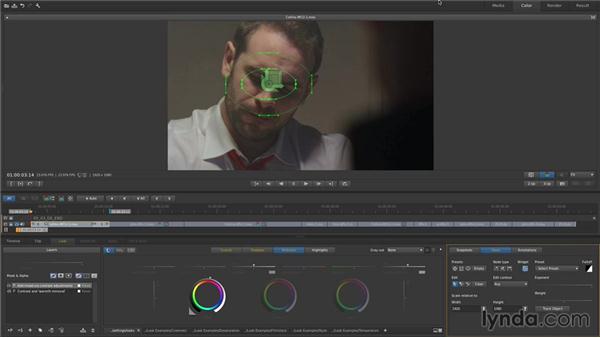 In this movie, we're going to take a look at one of my favorite secondary operations, tracking a face. If you've got a good tracker, tracking faces can really lift your craft to new levels as it helps you isolate what is quite literally the most important aspect of any shot. Or at least any shot that isn't a product for a commercial. And when I think about the various trackers I've used over my career I'd say the speed grade tracker is on average just about average and you'll see why in a moment.

First let's load up exercise file 05_03_DS_END. This is where we left off last time this sequence here in death scenes. And I am going to continue to work on this first shot here where I really want to pull out his eyes. I'll double click on this clip and that places the in and out points on it and I'll hit play for some looping action. And I'll also press A to hide the analysis tools for now. And let's watch his eyes and notice as this clip plays down you can see first his eyes slope downward to screen right.

Then his head tilts the other way and they slope downward in the other direction towards screen left. Now as it turns out, when his head rotates, this is going to be a bit of a challenge for speed grade and I'll prove it to you right now. So first we need to add a primary to which we're going to attach this shape and do whatever grade we're going to do on the inside of it. Now I'll come up to the mask menu and I'll select the feathered oval preset. Let's jump to the first frame of this shot and do what I would normally do which is rotate this mass to match the direction of his eyes.

And then I'm going to hit track. It took speed grade about a minute to track this shot which is a bit longer then I'd prefer for a seven second shot. Now watch what happens to this mask as I play it down. It matches the left right up down movements of his head but as his head rotates. No rotation gets applied to this mask. In other words, SpeedGrade's tracker, it only tracks X, Y coordinates, not rotation and since the trackers using up these key frames, I can't just key frame an overall rotation.

I mean if I wanted to do that I have to go key frame by key frame and which won't be organic. It's tedious and if I have a hundreds of shots to color grade, there's no way I can allocate my time to that kind of frame by frame roto work. I can probably get away with finding an average position for this mask and not worry about the rotation of his head. So let's delete all of these key frames. Then I'll jump to the outpoint, and I'm going to reposition this shape.

I'll make it a little larger then I would otherwise. I want it to catch his eyes, hopefully with his head tilted both ways. So it will be a little larger then I normally would. I'll do a quick grade to see if this will work and first I will set this as an outside because one way I will make his eyes more intense is to push back the rest of the image. We'll take a little out of the overall gamma, and the overall gain. I'll turn that layer on and off. Already I focused a little bit more on his eyes, but I do want him to be a little more insightful, so I'll add another primary layer, I'll link it to the layer below.

Set this to an inside correction. And again in speed grade the 12 way color corrector, this is only available by adding a primary layer but because we've got this mask enabled as a colorist, we're isolating a portion of the image and performing now a secondary operation using a primary layer. So now I am going to come into the shadow and I think I lift up the shadow gamma and the blacks are starting to wash out.

So I'll drop the shadow offest and let me open my analysis tools. I'll just, I want to see if I am clipping out any detail here in the shadows. I think we're also going to kick up the gain in the shadows just to get me a little more contrast in the darker areas of this image. All right, let's hide the grading panel to get a better look at this as well, let's also hide the analysis tools. I am turning on and off this inside mask. Yeah, I like that. It's not a lot but I don't think it needs a lot. Now if we select the layer below these two links layer and press this button, we can see the before and after.

Yeah, I like. Now let's see if this mask shape will work with the first frame so I'll jump to the end point and I can select either the third or fourth layer to adjust this mask. Yeah our general shape seems to work alright so now let's track. Great, let's see if this works. Yeah. Yeah, I'm happy. On this shot, even though the mask isn't rotating, it's a nice compromise and keeping the mask a little large and relatively soft, I think that helps hide the fact that it's, it's a bigger mask than I'd prefer.

Now, the last thing isn't in the shadows here under his eye, I think it might be going a bit magenta, so let's go into the shadows and take this magenta slider and pull away from magenta. That's feeling much better to me. Let's go full screen and see how this works. Yeah, I'm, I'm catching a little bit of the edge of the mask up here, nothing that I can't fix with just a quick tweak of the shape, otherwise it's looking pretty good. This is what the shot looked like before we started grading, now after both primary and secondary color correction, here's what we've got.

We absolutely increase the contrast, we've increased the perceived sharpness of the image, can you see that, and really as well we've really zoomed in and now we're focused in on his eyes. This is now the center of attention on this shot. I did have to fight the tracker a bit with its lack of rotation. The tracker is a little slow but I'll tell you what I think with a little bit of pre thought. Coming in here to isolate and track faces, here in SpeedGrade, definitely doable.