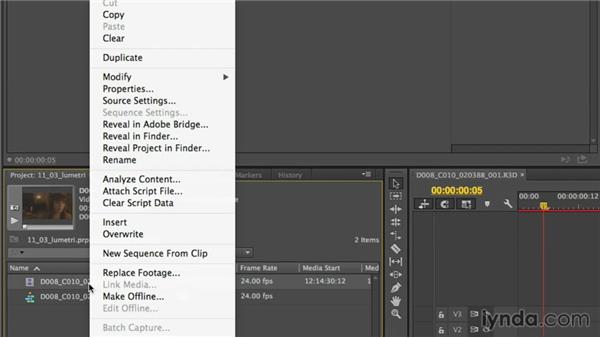 In this movie, we're going to talk about a brand new feature that starts to integrate Premier Pro CC and Speed Grade CC. It's called the lumetri effect, and it starts by creating a .look file here in Speed Grade. We're starting with Exercise File 11_03_lumetri and, if you find your system acting sluggish all of a sudden, that's because this is a red shot. Open up your preferences, I'm pressing the" S" button, come down here to dynamic quality, and set these to either one-quarter or one-eighth, and then I'm going to escape out and that'll save and close these preferences.

And, as I suggested you do in the movie on raw workflows, I've gone ahead and set the R3D decoder settings to red log film and red space, which are one of my normal starting points for red footage. Back here in the look panel, I've already defined an initial look, as I've been doing, I do different tasks in different layers. I'll turn on the base layer. This is a primary for the initial contrast expansion. The next primary is where I do a color balance,since the image was feeling kind of monochromatic. The next primary, I'm grading for more emotion, by working with contrast and bringing in more of that yellowish mustard feel that the DP gelled for.

Now in this next primary, I've gone ahead and turn this into an outside vignette to help focus the eye. And then I have added a secondary where I am keying out the darker shadows and de-saturating them, because I want to keep the blacks nice and rich not touched by color. Then, finally, a legalizer, just so we always know what the final image looks like once I clamp it down to prep for my deliverables. Here's the before, here's the after. Now I do notice this green fringe here, around the light, but the camera's moving so I'll have to track it.

This is an issue I'll deal with in the final grading. For now, I'm ignoring it. Now that we have our look, I'm going to save off this layer stack as a .look file. And, for our purposes, I'll open up the look manager, navigate to the desktop, and I'll save it there. Also, I'm going to turn off this vignette and save that, and you're going to see why in a moment, and now I'm going to rename them lumetri. And lumetri no vignette.

Okay, our work here is done, I'll quit out of speed grade. Notice, on my desktop, the .look files. Now, I already have open the premier pro project file 11_03_lumetri. If you have access to the exercise files, and need to figure out how to relink this footage, I cover that at the end of the exercise files movie at the beginning of this training. Now, here in Premiere, I've made sure that our red decoder settings match the settings and speed grade by selecting Source Settings, and then I matched up ISO, gamma curve, color space and Kelvin.

So now, when we take a look at this clip in the timeline, it looks like our original starting point. Next, I'll come in to the effects tab and start typing lumetri. Here it is. It's a premier effect. I'll drag it onto the clip and, immediately, a window pops up. Premier wants me to select a .look file. I'll select the lumetri look we saved and, boom, our grade, here inside premier. If I want to change it, I'll come up here, press this button, and I'm about to select lumetri no vignette, but before I do that, keep an eye on the left side of this image.

Now I'll select it. The vignette disappears. Here is the really cool thing about all of this. The lumetri effect isn't just an effect. It's speed grade running inside premier pro. Think about it. Not only can shapes be processed, but I have a secondary doing a live key that's desaturating the shadows, and then the NTSC legalizer applied on top of the whole thing. The lumetri effect is Speed Grade's 32 bit flow rendering engine, running here Inside Premier Pro CC.

Now, notice, I don't have any controls here in premier. The effect is either on or off. If I want to change something in this grade, I've got to go back to speed grade, make the change, save a new .look file, and reapply it here in premier. But this isn't the only way to apply the lumetri effect. Rather then applying this .look to the shot itself, let's turn off this effect. Now we're going to create an adjustment layer, and drag it onto the time line. Now, I'll apply the lumetri effect to the adjustment layer, I'll select the lumetri.look file, boom, a quick and easy way to add this to an entire timeline without touching any of the individual clips below it.