Colorist lingo: What is a primary correction? 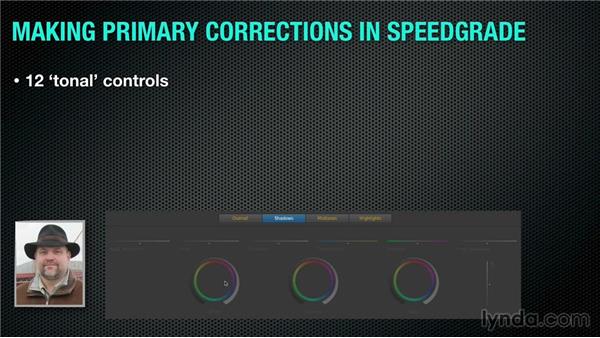 Join Patrick Inhofer for an in-depth discussion in this video Colorist lingo: What is a primary correction?, part of Learning Speedgrade CC 2014.

In this movie, we're going to get a little bit into Colorist Lingo. This is so that you have an understanding, so when I start talking about things like primary corrections or secondary corrections, you have an understanding of what I'm saying, what it is I'm talking about. And it allows you to communicate with other professionals who are familiar with the color-grading process. What is primary color correction? Well, it's the first thing that a colorist does. It's the primary action that we do. And really a primary correction generally set's the foundation for the rest of the more detailed work that we want to do in the rest of the image.

When we're working with primary's, we tend to be adjusting the entire image. We're setting the overall black. So setting the overall white. the mid-tones. We're adjusting the overall color balance. Things like that. what it doesn't do is, we're not really using masks, we're not using keys to like, key out a red shirt and then make it blue. Right? We're doing big overall operations. Primary corrections are broken down into two different categories. We're talking about making and manipulating brightness and luminance changes overall in the image.

As well as you know, color, hue, saturation, changes. And generally speaking, when we're doing primary corrections, we're doing a little bit of both. Alright? We're doing some brightness, we're doing some hue, maybe adjusting the saturation, pulling it back, adding more in. It all depends on the shot in front of us. The key is, is that we don't necessarily limit ourselves to one or the other, although there is an order of operation which we'll be talking about in later movies. Now, the thing to understand about SpeedGrade is, it's a little different than other apps.

You'll notice, we're not seeing any curves manipulations here. We're not seeing a lot of other kinds of manipulations you might see in other apps, and that would cause some people to think it's kind of a simple tool. And while it's certainly a simple interface. Really, it has a tremendous amount of power. You're typically, as you take a look at this, we've got our offset, gamma, gain. In other apps that might be shadow, mid-tone, highlight. And you're looking at that saying, really that is it? That is all I've got? I've got three controls? What you need to understand is this three-way control is replicated four times.

One for the overall image, and then once in each of the shadows, mid tones and highlights, essentially giving you 12 tonal controls. Instead of a three way color corrector, we are working with a 12 way color corrector. And if you're coming from curves and you really miss curves on let's say, Avid or Resolve or apple color. All you gotta do is realize that, you have got three points for shadows, three points for mid tones, three points for high lights, plot these on a curve and now you have your curve manipulations.

So these are very, very precise primary corrections. And one of the things you need to realize about speed grade, is that, it kind of bends the notion of what's a primary and what's a secondary. We'll talk about secondaries in a, in a later movie. It bends these notions, because there's so much precision here just in these primary tools. So, there are other apps that if they were to implement this three way color corrector, might talk about them more as secondary corrections than just primary corrections. Here in SpeedGrade, and really, even when I work with this I still consider these to be primary controls.

Even though I can kind of go in and segment and limit my controls to one of these tonal ranges, I still consider them to be overall corrections to the image. So in this chapter, we're going to continue. We're going to take a look at these contrast controls, these color controls. There's some very cool additional slider controls. And then we will look at how the user interface works. We're going to take a look against a gray-scale image and see how these things, these controls, affect our images, and do it very, very quickly. Because in the end, SpeedGrade is about speed.

And then we're going to take a look and see, we're not really limited to 12 of these controls. We can stack these primaries. And throughout this title we're going to, I'll be showing why you might want to do that. And we're going to be taking a look in this chapter about how we do that.

Video: Colorist lingo: What is a primary correction?