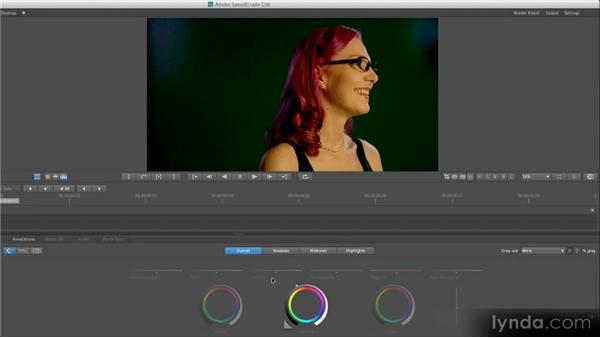 In this movie we're going to look at several really cool features in SpeedGrade including but not limited to blending different grades together. So, I have this footage of my wife actually, hello sweetheart, and she's actually shot (LAUGH) against a green screen. We have a lot of problems here, if I were to go into the overall area here and let's say lighten up the Gamma. We can see that there's actually blue spots on the walls and there's a green screen and it's just a mess.

So, what I want to do is crush the whole background to black. I want the pink in her hair to pop more. And I just want this to be a much better looking image if that's at all possible. So I could adjust things as per normal. I'm just actually going to Reset the gamma for now. But instead, what I'm going to do is I'm going to come over here to the Layers area, and by the way I'm in the Look tab here down at the bottom. And I'm going to add a new primary grading layer. I do that by coming down to the bottom Layers area and clicking the Plus P.

That gives me a second primary color correction layer and I could keep adding as many layers as I want to. Now let me show you the benefit of this here. I'm first going to make an assessment of what I want and I kind of mentioned that already. I want to crush the blacks, I want her to pop and I want there to be good contrast, I warm things up a little bit, I want to do all that stuff. So on this extra layer here, I'm going to do all of those things and I'm going to kind of go over the top about it a little bit. So I'm going to take the offset down, crush the blacks lets actually look at the gain first here. Let's bring this up so we could see what's going on and then I'm going to increase the mid-tones here.

Maybe a little bit more, Gamma, have a little more Gain. I want to go again, full throttle on all these changes. So it's really obvious what I'm doing there and actually lets maybe warm up the midtones a little bit to, take that a little bit too far. Okay, so now I have everything in the direction I want to go, I just went too far, and you can see our histogram was all out of whack and more blown out highlights and shadows, and that's totally fine for right now. But on this layer I have all the corrections, so what I can do is, with this layer selected, go up here to the Opacity of this layer and Click and Drag this down. And again if I want to go faster I can just hold the Shift, it goes significantly faster.

And I could dial this back to where I want it. Now the benefit of this, is that if I say you know I want more of that correction. I want to darken the background more, and make the highlights pop more. Then I could simply add more Opacity, or increase the Opacity of that layer. Or if it's too much, I can again take it down. So, I can take it to about this neighborhood, and we have some peaking, we should get rid of here in the highlights and a little bit and the shadows.

But overall I am definitely liking where this is going. Much better than I did when we set out to improve this image. I think I might want to still go a little crazy with the Gamma of the midtones. Maybe warm this up just a little bit more. And we could add a little bit of pink, making her hair pop a little bit more, but I don't want to mess with her skin tones too much. And this is actually 5K footage, so if we wanted to, we could really get in here in at 100% and (LAUGH) see how things are doing.

So obviously it needs to be denoised a little bit, and it's a little bit lower quality, so it plays back a little smoother. But the point is, is that we now have a much better looking image. I'll go ahead and minimize that. We now have a much better looking image, because we have this separate layer that we can blend into our footage. And these skin tones are looking a little bit off, so we might want to correct that. But again the point being is that we can go crazy with this top layer, and then blend it in to the rest of our footage. And again we can tone it down if we want to, or increase it because we have where we want to go on this extra layer.

And I'll press 0 on the numeric keypad, you could see the before and the after. Significantly improved.

6/21/2012
Adobe SpeedGrade is a color grading and finishing tool that allows video editors to control color and light for any type of content, and it is now part of the Creative Suite. In this workshop filmmaker and author Chad Perkins teaches the basics of this powerful software. Learn how to perform a basic color grade, create looks, mask footage, apply grades to multiple clips, and much more. Plus, see how SpeedGrade can fit into your overall post-production workflow.
Topics include: