Triads: The basics of chords 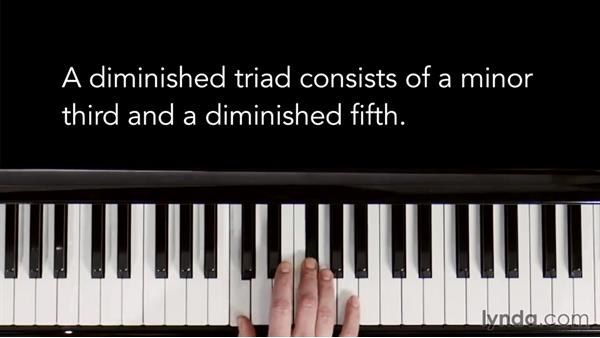 - Chords are the building blocks of songs.…They set the structure for where…the melody of a song can go.…Chords can consist of two or more notes, but typically…they are made of at least three notes, and often more.…A triad is three-note chord arranged in intervals of thirds.…Creating a triad can be easily done…by stacking every other note within a scale.…Constructing triads this way teaches us…one of the most important concepts in harmony:…all chords are built from scales.…Since the only scale we've examined thus far…is the major scale, let's look at the triads we can create…by using the notes of just the major scale.…

And for simplicity's sake,…I'll use the key of C major to demonstrate.…Let's start with C.…We'll skip D, and then play E.…And skip F, and play G.…These three notes, C, E, G, played simultaneously,…create a major triad.…All triads are named for their root.…And like intervals, their quality.…

The root of a triad is the note on which it's built.…We call the notes, C, E, G,…a C major triad.…As opposed to an E major, or G major triad.…

Video: Triads: The basics of chords