Plagal, half, and deceptive cadences 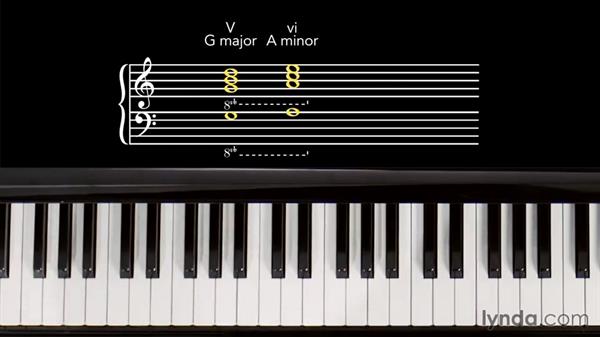 Join Julian Velard for an in-depth discussion in this video Plagal, half, and deceptive cadences, part of Music Theory for Songwriters: The Fundamentals.

- The Plagal Cadence is often referred to as the…Amen Cadence, as it's how many traditional hymns end.…It's the progression from the four chord to the one chord…or in C major, it's an F major to C major.…(piano music)…It has a warmer, yet less final feeling than the…authentic cadence.…This is for two reason, the first is the absence of a…leading tone resolution.…The second is that the tonic is in both chords.…

When I play the F chord into the C chord,…the notes that move are the A to G…and the F to E.…the C stays the same.…Without a B in either chord there is…no leading tone resolution.…(piano music)…Here's one way to play a plagal cadence on the guitar.…(guitar music)…These two elements make the progression less tense…and therefore less in need of release than the five one,…we never leave home.…

Using the plagal cadence at the end of a phrase or song…can give is a gospel and church like feel.…We also hear it used all the time in pop music.…In fact, it's built into the one five six four…chord progression we've seen before.…

Video: Plagal, half, and deceptive cadences