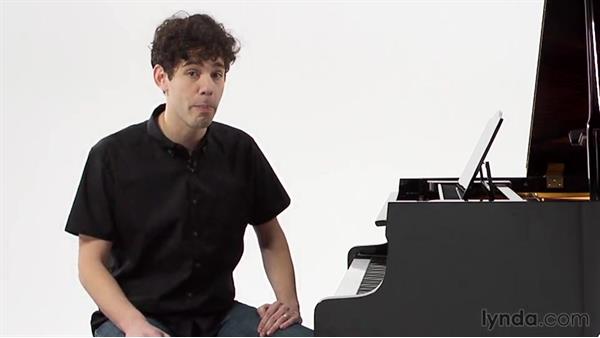 - Let's take a quick look at how we discern…the qualities of intervals we find in other keys.…When I first introduced the concept of intervals,…I said that the reference point for determining…an interval's quality is the major scale.…Thus far we've only looked at intervals…that you see as their reference point.…Now that we know the accidentals needed to create…the other eleven major scales,…we should be able to figure out the quality…of any interval we come across.…This distinction might seem trivial,…but when we begin our discussion of chords,…our understanding of intervals and; therefore,…appropriate keys is of extreme importance.…

The more complex the chord structure of a song,…the more our sense of the tonic will be questioned.…Let's jump straight in with some examples.…We'll start with the interval of B flat to F.…(piano notes playing)…To figure out what this interval is,…we'll treat B flat as the tonic…and count up to discern the number value of the interval.…We know from the circle of fourths…that there are two flats in the key of B flat…