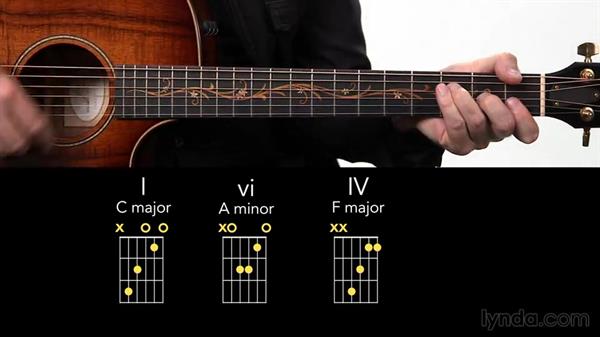 - Now that we've made our way through the building blocks of harmony, notes, intervals, triads, and the basics of scales, we can finally begin our discussion of chord progressions. From this point on, I'll be referencing real song examples for each new concept. After all, you're here to learn music theory for songwriters, right? Therefore I encourage you to listen to recordings of the songs I reference throughout the course. A chord progression is a series of chords that aims mainly to establish the sense of a tonality founded on a key or tonic.

The type of key may vary, from major to minor, but once it's established, it tends not to stray. And when I say popular, I don't mean pop music. This is true in all genres, from pop to rock, country to hip hop, electronica to punk and beyond. What does this tell us? Thousands of great songs have been written without ever leaving the key. The major scale alone possesses a wealth of harmonic information at your creative disposal. For the upcoming examples, I'll be using the Roman numeral names of chords based on the major scale that I covered earlier.

If this seems foreign to you, please refer to the video on Triads: The basics of chords. Here are several major scale chord progressions widely used in popular music. These chord sequences have become so commonplace they might be considered tropes, dare I say fundamentals of songwriting. For clarity, I will demonstrate these progressions with triads in root position in the key of C major. I-IV-V, or C major to F major to G major.

(plays chords) These three chords are the foundation of all modern popular music since the advent of rock and roll. The list of songs that use these chords in succession, or slight variants of them, is endless and stretches across all genres. Just a few famous and very recognizable uses of the I-IV-V progression include the choruses of Bob Dylan's "Like a Rolling Stone", Ritchie Valens' "La Bomba", Kiss' "Rock and Roll All Night", Whitesnake's "Here I Go Again", the Counting Crows' "Mr. Jones", and the verses of Bruce Springsteen's "Born to Run" and Billy Joel's "River of Dreams".

(plays chords) (plays chords) I-vi-IV-V can be referred to as the doo-wop progression. It's a signature chord motion of 1950s and early 1960s doo-wop songs. It's best recognized in Ben E. King's classic, "Stand By Me" or the Penguins' "Earth Angel", but you'll hear it in songs as recent as Justin Bieber's "Baby" and Sean Kingston's "Beautiful Girls", which is built on a sample of "Stand By Me".

(plays chords) (plays chords) The I-V-vi-IV progression has emerged in the last three decades to be one of the most common in popular music. Here is an abbreviated list of famous songs that use the chord motion I-V-vi-IV in the chorus or verse. It's pretty staggering. Alphaville's "Forever Young", Green Day's "When I Come Around", Journey's "Don't Stop Believin'", James Blunt's "You're Beautiful", "Where is the Love" by the Black Eyed Peas, Jason Mraz's "I'm Yours", Train's "Hey, Soul Sister", Elton John's "Can You Feel the Love Tonight", John Denver's "Take Me Home, Country Roads", Lady Gaga's "Paparazzi and Poker Face", U2's "With or Without You", Maroon Five's "And She Will Be Loved", Bob Marley's "No Woman No Cry", and the Beatles' "Let It Be".

(plays chords on guitar) (plays chords on guitar) Now, I'm not trying to discourage you from using these chord progressions. I feel it's invaluable for a songwriter to know and understand trends in popular songs. It can help you avoid cliches in your writing. Conversely, by using these chord motions in one of your songs, you gain access to the listener's cultural unconscious. This can make people feel like they've heard a song before even though it's brand new, which can be a good, or bad, thing.

There are plenty more chord progressions that surface time and time again in pop songs.. Rather than list them all here, the goal of this course is to show you how the harmonic motion, the sense of tension and release within these progressions, and others, works. And one of the best and clearest examples of tension release in a chord progression is the cadence.