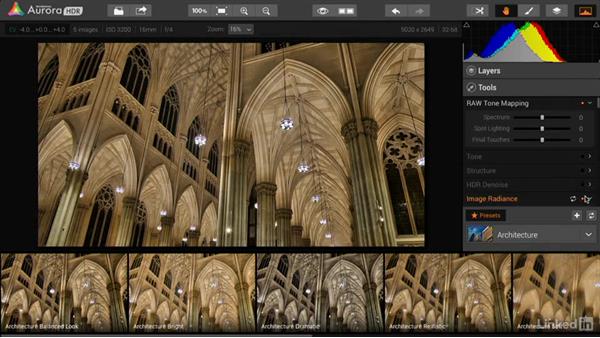 With HDR photography, you may have more dynamic range than what can be represented on a monitor or with a printer. Tone mapping helps you decide what parts of the shadows and highlights you want to preserve. In this movie, author Richard Harrington demonstrates how to use tone mapping in Aurora HDR.

- With HDR Photography it's possible to have more color and dynamic range than can be represented on a monitor or a printer. As such, you'll need to turn to tone mapping to decide what parts of the shadows and highlights and other tonal details that are presevered in the newly converted image. After all, you're technically converting from a 32-bit image, which has more details than we'll reproduce, down to a 16-bit, or 8-bit file. This is where tone mapping comes to into play.

- Let's go ahead and open up another image. Let's click the open button and then we'll go up a level and open up these raw images. The images will need to have the same extension. I can now click open, and the file comes in. Now you can choose to save the image you were working on or click don't save just to move on. In this case, you see that we have five images from the interior of a church. There were moving subjects so I'll choose ghost reduction. I was also shooting handheld, as a tripod was not allowed.

I had simply braced the camera on a ledge. I don't need chromatic aberration reduction however and I can now click create HDR. In order for ghost reduction to work you should choose a reference image. You could choose an image to use based upon the initital exposure value. I'll go with the base exposure with zero compensation. You can also choose an amount of low, medium, or high. The movement was pretty subtle, so I'll choose low and then click create HDR.

The image will be loaded, and in this case I'm actually going to end up cropping most of the people out anyways. Now the de-ghosting is applied. And the merge to HDR. I like where this is going, let's quickly crop the image though to get rid of some of the distracting objects. Now the people are successfully de-ghosted, but they really don't add to my shot much. So I'm just gonna pull up beyond there and a little bit in from the left edge here to remove that distracting edge, and press the return key.

There's the new crop. And what you're seeing is a basic image. Here's a single exposure. And here's the 32-bit image merged. Now there are a lot of presets that you can choose from. And some of these interiors, such as interior natural, look pretty good. What I want to work with though is the actual tone mapping. So let's start with the raw tone mapping, and we'll go back here to a really basic image. Let's choose Architecture, and we'll use this balanced look, and we'll start up here with the initial raw tone mapping.

You'll note that you can turn all of these off, in the meantime, by clicking the dot so we can work with something really quite simple. There we go. And I'm just gonna break this down, and walk you through what's happening. Alright, let's start at the top with the basic tone mapping. You can see that the merged image is showing increased dynamic range. Using the tone mapping controls, we can play with the lighting controls, and you see how it's shifting what's happening in the image.

Spotlighting is latching onto some of the brighter areas and bringing them out. Going too far though, can really start to lead to some artificial look. Spectrum here does a nice job of moving the entire bulk of that histogram across. So if you'd like a little bit more underexposed image drag that to the left. Final touches, starts to expand things in the dynamic range a bit. Now that's looking pretty good for the initial image.

Let's twirl that up and work a little bit on tone. I'll turn this on. And smart tone, is really where the tone mapping is starting to occur, and you see that it's pushing things further across the entire dynamic range. We have more intense highlights and darker shadows. Using the highlight slider you can really push those highlights quite far and they bloom, but I find that somewhere near the middle or slightly underexposed tends to work well. Your midtones will be the bulk of the middle tones.

In this case I'm gonna favor slightly underexposed. And bring my shadows down so they're nice and rich. Blacks will allow you to manipulate just the darkest areas. Same with whites to get brighter highlights. And what we've created here with some simple tone mapping is an image that has much more dynamic range and really cuts through. Let's add a little bit of structure.

And clarity is a selective contrast. You see if we toggle that on and off that that really brings out the dark black areas. The HDR look slider allows you to minimize the HDR stylized look or really boost it. You can adjust the softness and the total strength. So if you want a very strong looking HDR you could take that to the max. Or minimize it, so it's much more photorealistic.

I actually prefer that. Let's balance that out a little bit. And soften. Now taking a look at the before and after I really feel that I've done a great job of bringing out the architectural details on this interior shot. There are more choices to be had. We'll take a look at those next.

4/11/2016
Macphun Software's suite of apps and extensions give Mac-based photographers a broad range of creative options for enhancing tonality, creating black-and-white images, removing unwanted details from photos, and much more. In this course, Rich Harrington showcases the features and creative options that Macphun's tools provide. He also details how to use them as standalone apps or as extensions for Apple's Photos for OS X software and Adobe Photoshop.

Learn how to bring out detail and color with Intensify, convert photos to black and white with Tonality, remove distractions and heal blemishes with Snapheal, use the best filters in Focus, and remove noise and grain—before or after processing—with Noiseless. Rich also shows how to use the Macphun app developed by leading HDR photographer Trey Ratcliff, Aurora HDR, to create gorgeous high dynamic range photos.
Topics include: