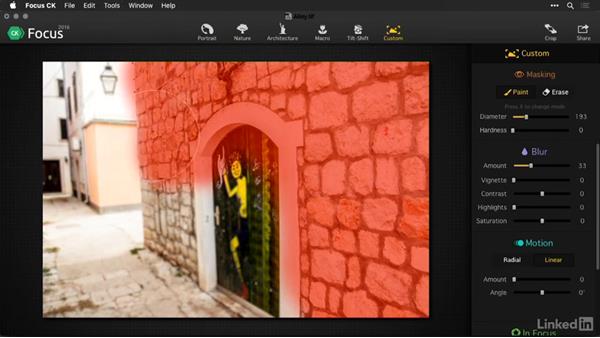 Depending on how your lens or lens and camera combination are set up, you might see some artifacting in your image from the lens itself. These artifacts can be intentionally included. How do you create these intentional artifacts in your image? Author Richard Harrington demonstrates how to create custom lens effects in Macphun’s Focus.

- Sometimes depending the way that your lens is set up or your camera configuration, you can see certain artifacts or behaviors that are inherent to the lens itself. Let's explore some architectural examples and tilt shifting examples to see how we can simulate or enhance some of these artifacts. I'll open up this example called "alley" and in this case there was a lot of light in the scene. As such, I ended up having to stop down to prevent the image from over exposing. Well, that's great, but some of this area in the background here is distracting.

So I'd like to illiminate that. Let's start with the architecture option. You see that what this creates is a simple ability to create an in focus area with fall off. Well, that works pretty well here and I can adjust where that blur occurs, position it on our subject there and rotate it till it lines up with the proper angles. I like that, but, it's not exactly doing what I want here in the foreground.

You can always move that and slide things over to give you more of the look you're going for. In this case, having things fall off. A little bit of darkening though will also help to have the area further away, fall off. Now, let's try tilt shift. It's very similar to architecture, but you see that it's actually blowing things out a little bit. Here, by default, a narrower slice is created. Let's take that and match it to the doorway.

There we go. And you'll notice that the background is getting quite a bit brighter. That's because the highlights have been cranked up. You can tone that back down and now it's behaving very much like the architecture. The highlights for tilt shift are simulating sort of that soft blown out look that often happens when shooting with a tilt shift lens or from a higher angle. I'll often create a little bit of a sense of motion there though and set the angle to match my subject.

Let's increase the width there slightly. And we've created an in focus area with a slight darkening. Now, this creates a clearer focal point for the image. In this case, the decorated door. I like this and by comparing the before and after, you see that some of the distracting elements that are less important are really knocked down. Now, we do have one more option which is custom which you might find useful. This option really allows you to paint things in and be super precise.

Let's start by masking. We'll adjust the diameter of the brush so it's nice and big and paint in the area to be ignored. In this case, the brick. Left bracket for a smaller brush. And intelligently tries to recognize some of those edges. It does pretty well.

Let's switch over to erase. Get a smaller brush and just clean up that edge. So now we've put that wall into focus. As I adjust the blur, you'll note that the other areas really start to fall off. Now, I'd recommend playing with the amount of motion blur and set the angle and then, come back down here to the focus controls. A little bit of sharpening really brings out those details.

Now, in this case, the background is too blurred. So, I would play with this just a little bit. Let's bat that down and just darken slightly. And you have to be careful. You might notice we're getting a little bit of a halo. A nice small brush, but a soft brush, is gonna make it easier to go over that edge. And I'll just paint more accurately to avoid that glowing halo.

Now, that feels a bit better. Let's refine that, we'll tone that down, take the vignette down, and we've got a good in focus area. Now, you might decide to paint a little bit with the foreground. And this is where having a nice big brush with a very soft edge, is gonna come into play. You can now paint gently to fill in these areas just a little bit and create a bleed as it falls off.

Now, we were able to create an area that's in focus. Essentially, the sidewalk here, up to the edge of the wall, then with gradual fall off. These sort of controls, really come into play and are quite nice. By refining the amount of the motion blur, the angle, and the total amount of blur and vignette, you can create nice realistic effects. Be very careful though, not to overdue the darkening. You see there, it can get quite dramatic. This did make it easy to see my bad edge however, so you can always switch over, grab your paint tool and clean up any of those edges.

We'll simply erase away here. And by darkening that so dramatically, it becomes very easy to see my selection. That looks good. Now we'll tone down that vignette and a quick compare will show us the before and after. I like that. A much more subtle effect that's ready to be shared or published. You can go ahead and save this image. This will then write out either a native document that allows you to capture the changes as a focus document or you can save to popular file formats.

4/11/2016
Macphun Software's suite of apps and extensions give Mac-based photographers a broad range of creative options for enhancing tonality, creating black-and-white images, removing unwanted details from photos, and much more. In this course, Rich Harrington showcases the features and creative options that Macphun's tools provide. He also details how to use them as standalone apps or as extensions for Apple's Photos for OS X software and Adobe Photoshop.

Learn how to bring out detail and color with Intensify, convert photos to black and white with Tonality, remove distractions and heal blemishes with Snapheal, use the best filters in Focus, and remove noise and grain—before or after processing—with Noiseless. Rich also shows how to use the Macphun app developed by leading HDR photographer Trey Ratcliff, Aurora HDR, to create gorgeous high dynamic range photos.
Topics include: