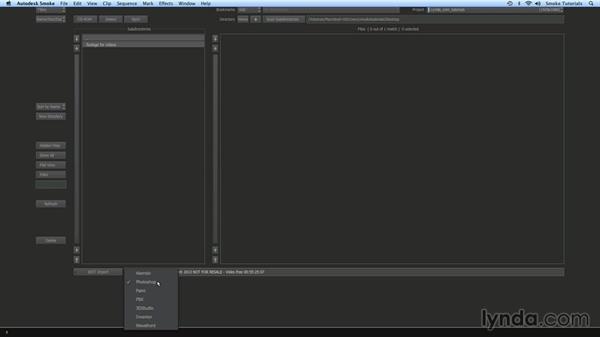 Join Amy Leland for an in-depth discussion in this video Creating a ConnectFX clip and using the Action node to import layered Photoshop files, part of Smoke 2013 Essential Training.

In this lesson, we're going to explore some of the options you have inside of the action module for importing layered materials. We're going to import both a layered Photoshop file as well as a 3D model and look at how to manipulate those within an action scene. I'm going to start by creating a new sequence. Again, I'll right click on my Sequences library and choose New Sequence. Or you can use the shortcut Cmd+N. I am going to call this sequence, action import. I'm going to also close the other sequences I have open. When you want to work with a layered Photoshop file, the best way to do that is inside of the action module.

There is a method for importing inside of action that gives you better control over those layered files. That doesn't mean you can't import it as though it were another file. In fact, let me show you. If I go to my media hub as though I were importing a regular clip, I'm going to navigate to that bookmark I have set, where I have the files I've been using for this course I'm going to go into the Footage for videos folder. And I'm looking inside this folder for other import files. Inside of there we have a folder called Action elements.

That's what we're going to want to do. I'm going to undo that import, and come back to my timeline. Instead, I'm going to start an action scene the way we did before, using this one frame gap that exists in the timeline. I'm going to select that gap, and create the Connect FX, on that gap. With that gap selected, again, you can select your FX button, right-click on that gap, or use the Ctrl+Tab shortcut to bring up your effects. And I'm going to create a ConnectFX. I see the same thing here that I did before. Our gap is the back clip and our results.

In order to import those layered files, I'm going to use this action node called Import. But this node works very differently from the other nodes we've used so far. I'm not going to bring this node into the schematic. Instead, right here in the Node Bin, I'm going to double-click that Import node. That takes me into a browser that allows me to look for the file I want to import, and one thing I want to point out before we go too far. There is a file type selection down here. While you are using this browser, it will only show you files that match that file type.

But let's take a look. We can import several different kinds of files, including the two that we're going to bring in, in this class. I'm first going to work with a layered Photoshop file, and later in this section of the course, we'll also bring in a 3D studio model. But make sure right now, this is set to Photoshop. Browse here to wherever you've been storing the footage we've been working with, and then once you find that Footage for videos folder, I'm going to go into there. I'm looking for this folder called Other Import Files. And I'm looking for this folder called Action elements.

And because I have that Photoshop file type chosen, I see that right here. Just be aware. Be careful before you click on anything. I have Photoshop chosen as my file type. It's showing me all the Photoshop files. As soon as I click on one of them, that import will begin. And here's what's great about importing these Photoshop files into this action module. I'm going to hold down my Option key so I can drag on this top access node and move this entire thing into the schematic. As I mentioned earlier.

But again, what's really great about this is having the ability to choose. Do I want to manipulate an individual layer or the entire Photoshop file as a whole? The other thing I want to point out before we get too much further. You may remember in our previous action scene because we created it using that one frame gap, our entire scene was only one frame long. In that last example, we solved the problem by setting the scene length to the same length as the clips in the scene. A Photoshop file doesn't have a natural length.

In this case, you can decide how long you want it to be. If I would like this to be a five second scene, I could click here and for my time code type 500, and there I go. I have a five second scene. This Photoshop file will play for that entire five seconds. And that gives me some duration if I want to animate things later on. One final thing I'd like to show you as you work in the action schematic. If you build a complicated enough action scene, it may actually be difficult to see the entire scene in the schematic.

There's a really useful tool you can turn on to help with that. Over here to the right I'm going to click on this menu that says View. And on the far left I have this option that says Navigator. When I click Display, that navigator is turned on. And what you can see here is your entire action schematic, and then a square inside showing you what your current view is. So for instance I can see there's something that's missing over here to the side. And I scroll over here, and I say, oh look at that. There's a default camera.

We're going to actually manipulate that camera in the next scene. And then I could Option-drag this axis to maybe try to get everything to fit into the scene together. But you will sometimes have schematics where you may not be able to see everything at one time. Now I'm going to turn that navigator back off for the moment. I use that when I'm getting lost and need to find things. But then I want to keep my view clean here and focus on just those nodes. But now you know where that navigator is if you need it, and I'm going to turn my view menu back off. Now that we have this Photoshop file in, our next step is to create a 3D scene out of the layers.

We're going to do that in the next lesson. 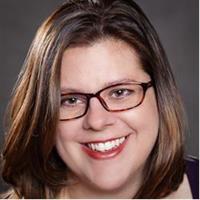