Lofting the walls and adding trim 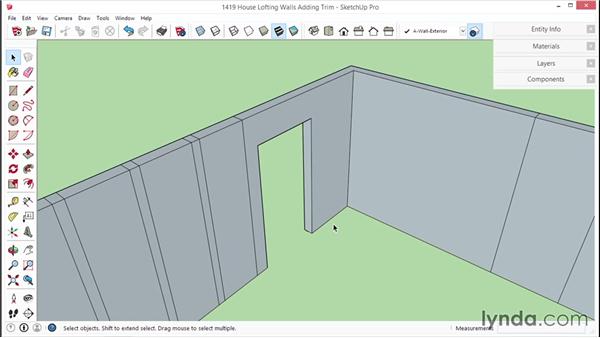 After you set floors and walls in SketchUp, your next step is adding trim to doorways and to the tops and bases of a wall. You'll work in several views, such as Perspective View, when you raise the walls to add your trim. In this online video, learn how tools such as Follow Me help you in lofting the walls and adding trim.

Once the import has converted into SketchUp walls and floors, the next step is to lift up the walls and add any trim to the top of the wall or at the wall's base. And even around some of the doors. What we're going to do is just make sure that we're ready to raise the walls. I'm going to come up here to the Isometric View and click on it so I get to see basically my floor plan now in isometric. I'm going to zoom in. Okay, now that we are basically in the isometric view from the view bar, the next thing to do is to come over here to Camera.

Make sure that we put it into Perspective View. So we're now basically set up to work. Now, the way that you lift up walls is fairly straightforward. You come over here to Push/Pull and pick it. And you come over, you select the face. Click on the inside of that face and lift up. In this case, I want it to be eight feet, so we'll just put in eight feet. And there we have it. We have a wall now that's eight feet. Now once I have one in place, I can use the Push/Pull tool, and bring up all the others.

All I have to do is come over, and kind of connect up with the inference on the geometry here, as you see here. So you can just see I can quickly, come up and do that. Now it also works on other aspects, too. Notice I have a wall over here. I'm going to just come over here and say, line it up with this edge. It does that. I can do the same thing over here with that edge. So forth and so on. So it becomes relatively easy to be able to do that. Okay.

Now that we have all the walls in this area put together, they're all at eight feet, I'm going to come over here and hit the Select button and then just kind of zoom out so I can see my work. You'll notice here that I have a number of walls that are lifted up. And we're going to concentrate on putting in the door. And I'm going to come over here and take out this unneeded set of lines on both sides. Just going to get that out of the way for a second. Get rid of that. And we have to build basically a transom over the door. So we're going to come in and pick up the pencil tool.

And we gotta make sure first of all that we're on the right layer, so we're going to pick up A Wall Exterior. And I'm going to draw basically along these points here. So now I have a surface, or a face that's been made. I'll kind of lift it up and use Push/Pull to drag it down. And I'm going to make that roughly 16 inches going downwards. Now that I've got the transom in place I don't need some of this added geometry here. So I'm going to take out some of these extra lines that I don't need, and do the same thing on the interior as well.

That kind of cleans it up. And if I want to apply materials, I then have a clean surface to play with. So there we have the door opening roughed out. Now the next thing to do is to go ahead and put in door trim. You can put in door trim any time. That's always a good idea to have the door in there, but it's a little bit simpler at this point to show how to do this than anything else. So in order to do door trim, it's a good idea to make a profile.

A profile basically is nothing more than a 2D drawing, and which we have already got some created. Once you come over to Components > Details > Open or Create Local Collection. In there, go to your Desktop > 3D Library > OK. Now what happens is that there's all sorts of content that's been built for this course here.

One of which is a door and window mold. And we're going to bring that in. We're going to place it, right there. going to hit Select, and then we're going to kind of window that area. It's a little tough to see. And you'll see here that all it is is a 2D profile that's been drawn in SketchUp with a face. And I'm going to move it into place, and just pick it up over here, and stop it there. Now, in order for this to work, I'm going to be using this tool here which is called the Follow Me tool.

It's also the wild man tool. It's kind of crazy when you use it, so we're going to have to be kind of careful in playing with it. It will not work with a component or a group, and that's what this is. So, we're going to come over here, right click and hit Explode. And we're going to have to hit Explode twice, so we get it down to its profile and nothing more than the face. Next, I'm going to come over here do and a zoom extent, and reset the view. Because when you work with this Follow Me tool you've got to have a lot room to play in.

So I'm going to kind of move this around so I can see as much of the drawing as I possibly can and also at the same time see that profile. I'm going to kind of window the area a little bit more. So that, I think is about as close as we're going to be able to get. And I'm now going to pick up the Follow Me tool. And I want to make sure that I try to get that face. And I think I have it. You see I get kind of a wild result. That's what makes it wild. I'm going to pick it again, and I'm going right along the edge there, that's what I wanted to pick.

And you'll see here that I can pick the edge, and it follows right along like so. It's kind of a crazy tool to use, but it's very useful once you get the hang of it. And as you can see there, I've got molding now going around that doorway. Raising the walls is a very straightforward process. Determine the wall height for the first wall, and then use SketchUp's inference method to set the other wall heights. You can create door, window, and base crown trim by creating a profile and saving it to your 3D Library.

It's a good practice to follow since you can reuse these profiles over and over again. Use the Follow Me tool to go around these openings. Just be careful with it since it's kind of a crazy tool with a mind of its own sometimes. 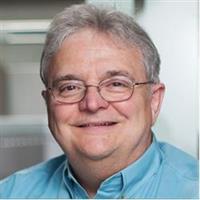