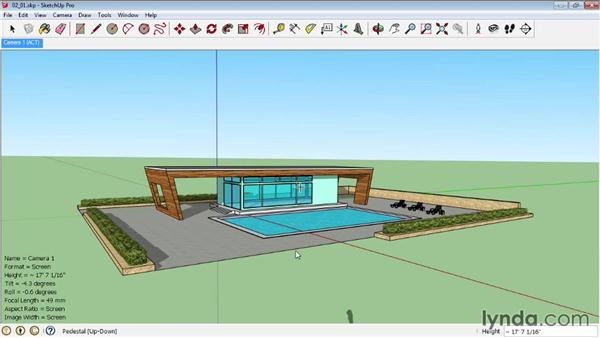 And these are really just standard film and video types of cameras. But right now, we're just going to create a camera. So, I'm going to go Advanced Camera Tools>Create Camera. It's going to ask me for a name. I'll use the default, Camera 1 and hit OK. Now when I do this it creates a scene here and gives me a tab. Tells me this is Camera 1 and in parentheses it says ACT which means that this is an Advanced Camera Tools camera. Now, if you don't remember about scenes. If we go into Window>Scenes, you'll see that it's actually created a scene here.

And this is really where we can have multiple views into a specific scene. Now along the bottom left-hand side of the screen, we have information about the camera. Such as the name of the camera, its format, focal length and so on. Now along the bottom is how to actually move the camera. So, it's a nice little help line here, it tells exactly how to manipulate this camera. If you left click and move left to right, you're panning. Up and down, you're tilting the camera.

But hold down the Ctrl and move the mouse down, I'm reducing the focal length. And you can see the focal length right here. Right now we're at 58. If I move down a little bit further, you can see I'm at 49. And then if you hold down Ctrl+Shift together, you can pedestal the camera. Which is basically just moving the camera up or down. Now, we can also add multiple cameras into the scene and we can do that simply just by adding another camera. We can go Tools>Advanced Camera Tools>Create Camera.

So, if I wanted to say look here, I could. Now, because these are scenes, when it creates a second camera, it's actually created another tab. So if I click on this first tab here, it actually goes back to that first camera. And it I go to the second one, you can see it goes into the second camera. Now the really cool thing about this is that these cameras are actually physical cameras in the scene. So if I go into my Outliner, you can see I've got two cameras.

I've got Camera 1 and Camera 2. Now, I'm looking through Camera 1 at this point, so let's go ahead and click on Select Camera 2. And you can see it highlights in blue and then I get this big box here which basically shows you the aspect ratio of the camera. And because it's a physical camera, I could also use the Move or Rotate tools to actually position that camera if I wanted to. Now one of the things about these cameras is that they are physical objects in the scenes, so they will do things such as cast shadows.

So if I have Camera 2 selected, I can go into Entity Info. And you can see that this cameras casting shadows. So if I were to say zoom in a little bit. You can see that there is actually a shadow there that this camera is casting. I can certainly turn that off by just going Cast Shadows and turn it off. If I want, I could also go into my Outliner and select my current camera, Camera 1. And you can see right here this is the shadow for this camera. And I can also turn that off. So if you are using shows in the scene, it's a very good idea to turn shadows off for those cameras.

So those are some of the basics about how to create cameras in SketchUp. So let's go ahead and move on to some more advanced features of these cameras.

3/20/2014
SketchUp Pro may offer "3D for everyone," but that doesn't mean it's light on professional tools. Learn how to create more compelling 3D graphics using the advanced features in SketchUp Pro. Author George Maestri introduces solid modeling with the Boolean operations and Trim and Split, adding and manipulating cameras, and creating terrains from contours and from scratch. Then he dives into the new Dynamic Components, SketchUp's most powerful feature, which can add motion and interactivity to a model. Last, he explores two companion apps (LayOut, for creating documents featuring SketchUp models, and Style Builder, for creating custom styles) and reviews the plugins available through the Extension Warehouse.
Topics include: