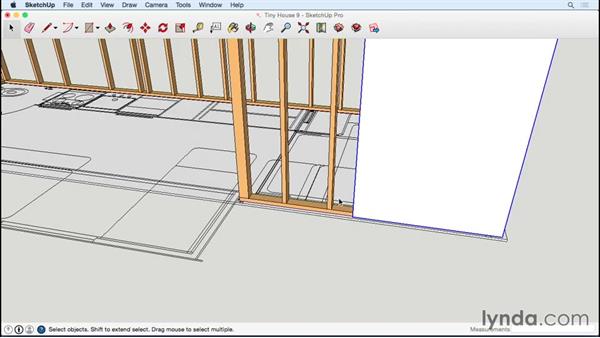 - In this video we'll make our first sheet of exterior plywood, but before we do, let's think about layers. Go to the Window menu and open the Layers window and you'll see that there are many layers that come with the CAD drawing. Toggle off plumbing and you'll see the toilet and the sink disappear. Toggle off furniture, slide out, and so on. I'll just put them back on for now. So, we already have some layers but we can also create our own. So let's click on the plus button here and let's give this new layer the name Framing.

So far there's nothing on that layer. We have to move the objects that we've already created onto it. So, I want to select everything and then hold down shift and deselect the CAD drawing and deselect the sub floor. Then go to the Window menu and choose Entity Info and change the Layer assignment here in this dropdown menu. Change it to Framing.

Click off to the side to deselect and see if it worked by toggling the layer off and on. Great. Let's create a new layer called Exterior Sheathing and let's set layer current by clicking this radio button. Whenever you create things they go on the current layer so as we make our plywood, it will automatically go on this layer and we won't have to move it with the Entity Info palette. I can actually close both of these now and create some plywood.

Press l for line and draw a line from the very top here to the bottom. And plywood comes typically in four by eight foot sheets but you can also get it four by ten. In this case we're going to need a taller piece of plywood. I believe this wall is higher than eight feet. Let's measure it. Press t and let's measure that. It's nine foot three and change. So yes you'll need four by ten sheets here. Select that line and let's copy it over. So press m, click some arbitrary point and then press the option or alt key to leave the copy behind.

Make sure the mouse is moving in the green direction and then type four feet. That's 4', enter. Draw another line, down here, connecting the end point of the new line and the old one. Press the space bar. Go up here, press l, and then draw that line. Once we create a closed boundary SketchUp will automatically generate a face. Then press p, click on the new face move the cursor to the left and let's just navigate down here to the bottom.

And you can see, on the plan there's actually a mark that represents the thickness of that plywood. But I can't snap to it because as soon as I pull over here, the object obscures it. So I'll press x to go into X-ray mode then I can click right there. Press x again. Press the space bar, triple click on the plywood and press g to make a group out of it. Now, the plywood has to be attached here to the framing. So, if you notice, there isn't any framing there.

So what we're going to have to do is move some of this framing over. I'm going to select that and I'm going to move it from the center of the object. So that's called the midpoint in component. I'll move it this way and hold down shift and then I want to click over there but I can't because it's obscured so I'll press x. Do that again. And i need to snap to the end of the plywood like that. That way we'll have a surface that we can attach the plywood on to.

So, when you sheath the tiny home you'll discover that you're going to have to adjust the framing so that everything will work. Okay, I'll press x again. So, we're going to use this sheet as the basis of our exterior sheeting, so let's give it a texture. This time, I think I'll use a bitmap rather than a simple color. So type b for bucket, go to the SketchUp color palette choose Colors in Model right click in a blank area and choose new texture.

Select the construction plywood JPEG and let's give it a size. The JPEG, it's got a width that's half as large as the height because it was designed more like a four by eight sheet of plywood so let's just make it a four foot by eight foot plywood. Okay. Click on it and then click on the plywood. Now, unfortunately, this plywood is higher than eight feet so we're going to have to do something else, also.

Otherwise, we're going to get this tiling mark that represents the repetition of the bitmap pattern. So, what I'm going to do is double-click on that to go into the group. Then I'll select the outer face and assign the material directly to that by pressing b. And click on it. Now, nothing seems to have changed but what we did here is we assigned that material to this particular face. Once you've done that, you can right click and choose Texture, Position.

And you get these pins. So, the way that this works is you position the texture with this red grip. And you can scale and rotate it with the green one. What I want to do is scale this over by dragging it to the right so the texture is this big which is a little bit larger than the plywood. Incidentally, these other pins distort the image, if you want to do that. But we don't need that in this case.

So I'm going to right click and say Done and then click outside. So now we've texture mapped a bitmap onto the surface of that plywood. On the inside, you're going to see that it still has that repetition line but we're never going to see that anyway so let's not worry about it. If we wanted to correct that, we'd have to select that interior face and apply the material to it separately and then adjust the texture position.

8/11/2015
Whether you are a tiny home aficionado or just want to improve your SketchUp modeling skills, this course will help you build an entire home on wheels—with many clever space-saving features and a scope to keep you interested and challenged.

In this course, author Scott Onstott shows step-by-step how to build a tiny house, including every virtual stud, sheet of plywood, and appliance going into the project. Along the way, he explores SketchUp features such as components, groups, layers, and textures. By building a house in SketchUp in this detailed manner, you can work out any unforeseen spatial conflicts in the design and virtually eliminate construction problems before you are in the field.
Topics include: