Scanning simple line art and changing it into vectors 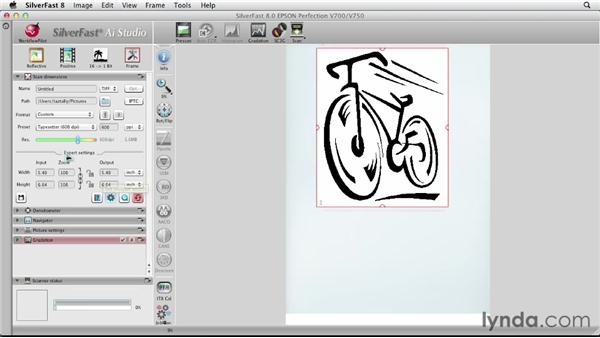 In this video, I'd like to show you how to capture and scan in Manual mode a simple line art image and then convert it all the way to vectors. We want to go to vectors with a simple line art image so that we can make a resolution-independent file; so we can scale, skew, and rotate it without any loss of image quality at all. So that's where we're headed. To start the process, let's just click on Prescan so we can capture the image that's on the scan bed at low resolution to see what we're talking about. And this is about scanning simple line art, so let's first talk about our image just a little bit, so we know where we're going.

When you're scanning line art, you want to make some decisions early on in your production process. Now simple line art like this, we can take this to a vector. More complicated line art, which we'll do a little bit later, we're going to want to leave it as pixels. So I'll make that decision, pixel or vector, right at the beginning, and I'm going to take this into vectors, the file that is the most flexible to use. So now that we've made our decisions, we can set up scanner. First of all, we're going to choose what kind of image do we have. Is it a reflective image, is it a transparency? And Wide Transparency in the scanner just gives me a little bit wider bed to work with, that's all.

So is this a piece of film or is it reflective art? We're going to choose Reflective. Then is this a Positive or a Negative image, and when we choose Reflective, it's always going to be Positive, so there's really no choice here. And then we get to Bit Depth and when we click on this one, hold onto your hats because we've got all of these different choices. Well, we'll get a chance to use all of these at some point, but here, we're going to make a decision on one of these top three here. We're going to end up with either 1 Bit and 8 Bit or a 24 Bit image. Well, this is a piece of black and white line art so there's no reason to go to color in this case.

So we can just boil it down to 16 Bit and 8 Bit right off the bat. Now whether we go with 8 Bit or 1 Bit, the decision here is based upon a decision we've already made. If we're going to take this image over here to vectors, then we want to scan a 1 Bit image. If on the other hand, we intend to keep this image as pixels, then 8 Bit is typically going to be a better choice. We're going to go to vectors, we're going to go with 1 Bit, in the next video, we're going to go to an 8 Bit and we'll get a chance to compare the two. So 16 Bit - > 1 Bit and you'll see what 1 Bit means when we get done with the scan.

It's the simplest of all images, simple 1 bit black and white image. All right! So we've made our basic choices. Now we're going to go to our frame and we're going to set our frame up and we just need to capture the entire image so we can tighten this in as much as we can without interfering with the actual image itself, because the more wide area we have, the more white pixels and the larger the file is. So we don't need to get it any larger than necessary. Now let's go to the Scan dimensions dialog box, and since we're going to vector, our issue is we want a very, very high quality edge that is no interpolation, no made-up pixels.

We don't want to use anything lower than that. We want to use some number that's one of the optical resolutions and the optical resolution of the scanner is 4,800 pixels per inch. That's the maximum optical resolution. And 600 is just a full number division of that, so we're going to use 600 pixels per inch. You don't need to go up to 1,200 or 2,400; 600 is going to be just fine. Then we want to make sure that the Input and the Output is the same, the Zoom is at 100%. By default, it should be when we just do a manual frame like this, but check. So we've got our scan dimension.

Very often, we want to just reproduce this image just exactly the way it is. But we have the ability here using this slider to either thin or fatten the edges of our object if we want to. Because even though we're creating a 1-bit image, the scanner actually captures it in 16-bit, so the edges are actually little bit fuzzy coming into the scanner and that gives us the ability to actually control where the actual edge pixels are. So if I wanted to fatten the lines in this image of the components, I could drag it this way.

If I wanted to make it a little bit thinner, I could move the slider this way. I want to actually just capture the original image just the way it is, so I'm just going to set this right at 0 and we'll be good to go. So that's the Gradation dialog box and as far as this graphic is concerned, we're really good to go. So what we can do is we can click Start Scan and then we can watch this down in the Scanner status dialog box to see how long the scan takes and watch the progress. Okay, once the scan is complete, you can then click this button and SilverFast will launch Photoshop and open our 600, 1-bit black and white image.

So what we end up with then is a black and white image that's 600 pixels per inch and what I'd like to do is go to my Magnifying Glass and I just want to zoom in and show you what this looks like. See this is a very, very high-quality edge with very few bumps along this edge. And the reason why it's such a high- quality edge is because we scanned it 100% and scanned at the optical resolution of the scanner, so no interpolation in those pixel edges. Now, we can actually use the image like this and we could print it like this, but better, is to take this image and convert it into vectors.

Isn't that gorgeous? I end up with a beautiful, beautiful high-quality edge. And this image is completely scalable, skewable, rotatable because it's now a vector. It's no longer pixels. Let's compare it back to the edge in Photoshop. You see this is a nice edge, but it's nothing compared to this one. And with this image, the pixel-based image, if we scale, skew, or rotate it, that edge begins to get rougher and rougher and rougher. But with the vectors, you can scale it, skew it, rotate it as many times as you want and the quality is maintained.

So that's capturing a simple line art image at 1 bit, at 100%, at the optical resolution of the scanner, and then converting it to vectors. The next video which is a companion one, we're going to scan the same image but then keep it as a pixel-based image and I'll show you the adjustments we make to capture and save the image that way.

3/23/2012
In this course, photographer and scanning expert Taz Tally describes how to use the LaserSoft Imaging SilverFast software to scan photos, line art, film negatives, and other printed documents, while getting the highest quality scans possible from your scanner. The course begins with an overview of SilverFast, then takes a task-oriented look at the SilverFast automatic and manual scanning modes, showing numerous scanning projects from start to finish. The course also explores a variety of specialized scanning topics, such as removing color casts and scratches, High Dynamic Range (HDR) scanning, and wet scanning.
Topics include:

Video: Scanning simple line art and changing it into vectors