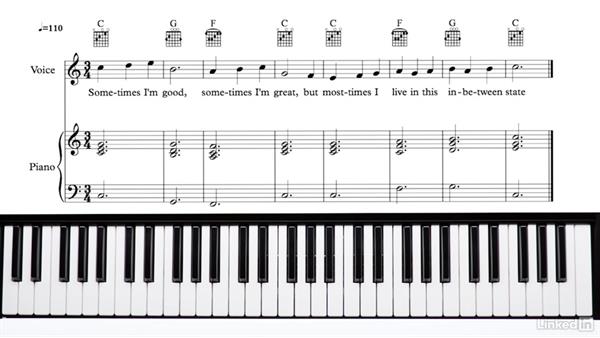 Join Julian Velard for an in-depth discussion in this video Harmonize a melody: Major 7th, part of Songwriting Techniques with Chords.

- In this chapter, we are going to take a look at harmonizing a melody as an extension of the chord beneath it. Because we're going to open up the harmonic possibilities to look at chords that consist of four notes or more, these concepts will become more complex as we go. I'm going to do my best to make these as easy to follow as possible, so stick with me. Harmonizing the melody as a chord extension will open up more exotic and lush harmonies. But as a result, the dissonance between the harmony and the melody will become more pronounced. Let me show you a quick example of what I'm talking about before we jump into a song.

If we apply what we know from that chapter we can figure out that the chord in C major that has E as the major seventh is F major seven. Now, listen to the tension that's created when I sing the melody note of E against an F major seventh chord. Did you notice that chord was substantially denser than the triads I played earlier? This is because it consists of four notes instead of three and also because the melody is accentuating the major seventh.

Okay, let's take a look at a song example that harmonizes the melody as a major 7th, a little diddy called sometimes I'm good. Throughout this chapter, I put all the examples in the key of C for the sake of clarity. But for the sake of variation, I put this example in waltz time, or 3/4. Let's hear it. ♫ Sometimes I'm good, sometimes I'm great, ♫ But most-times I live in this in-between state. So, the harmonization of the song is pretty straightforward.

I use the one, four and five chords in C major which are C major, F major and G major. And I made sure the melody is only representing the root, third or fifth of the chord beneath it. So, let's look at where we have an opportunity to turn the melody into the major seventh of the chord below it. Keep in mind, we're going to do this by staying in the key of C major. That means I'm going to only play white keys. As you'll see later on, harmonizing a melody as if it's an extension of a chord, can push us out of a key pretty quickly. I see an opportunity for a major seventh in bar two where the B falls on the downbeat.

I see another opportunity in bar five where the E falls on the down beat. Keep in mind there are only two major seventh chords in the key of C, which are C major seven and F major seven. So, I'm going to go ahead and play you a re-harmonization of this song that makes use of these chords along with a couple of other adjustments for voice leading. So here's a re-harmonization of the song with major seventh chords, where the melody is going to function as the major seventh. ♫ Sometimes I'm good, sometimes I'm great, ♫ But most times I live in this in-between state.

Okay, let's take a look at what I did here. Now I took the G chord from the original harmonization that happened in bar two and I turned it into a C major seven chord and if you noticed, the B in the melody is functioning as the major seventh. Let me show you the difference between these two chords and how drastic it is. Here's the original harmonization on piano of the first two bars. The C to the G. And now, here's the new harmonization of the C to the C major seven and listen to how different the melody sounds in bar two.

Do you hear that? Very different. The next change occurs in bar five where I turn the C major triad into an F major seven chord. Let's take a listen to that. I also made some adjustments in the harmony in bar six and seven to accommodate for voice leading. Let me show you what I did. I took the F major chord in bar six and I turned it into an A minor seven chord with an E in the base and I took the G major chord in bar seven and turned it into a G chord with a D in the base.

So, you can see how I voice led the harmony. Let me play you bars five, six, seven and eight again in sequence and you can really feel how it all moves towards the final chord of C. ♫ Most times I live in this in-between state. Sounds nice, right? So now that we've looked at some ways we can harmonize the melody as if it's the major seventh of a chord, let's see how we can apply the same principle with the minor seventh. 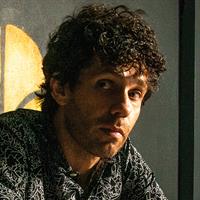