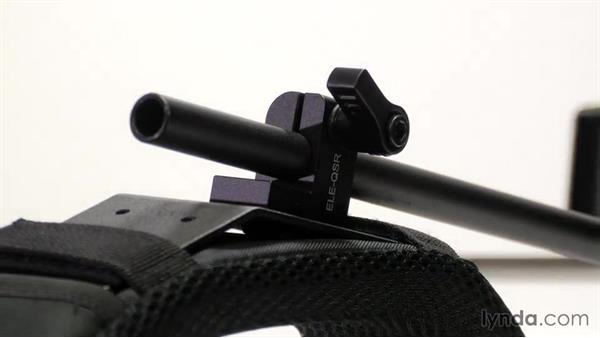 - You know Rich, a few years ago, when companies like Redrock and Zacuto came out and they were, you know, pretty darn successful. - Yeah. - With the sale of their different rigs for DSLRs and different cameras out there were honest, you know, Redrocks, Cuto, those are high-end manufacturers. And it didn't take long for other companies, who traditionally made other products, to kind of go, hmm. - There's a market. - There's a market here and one of the manufacturers that I have really gotten into recently -- - Yeah. - Because they make pretty good stuff that doesn't break the bank is this company, iKan.

Now they make some stuff that I think is pretty darn cool, including this rig that I have here and you have one similar. This one is actually for a Blackmagic Pocket Cinema Camera, you actually have one there for a GoPro. - Believe it or not, yeah, and we're going to walk through this. One of the reasons why I like these particular rigs, I first saw these folks at NAB, I was very happy with the equipment. I went and asked some hard questions. They've got good policies with customer service. They've got good warranties on their products. The grips are not as spongy as the other ones, but they're pretty comfortable.

They really hold up well, particularly if you get wet or sweaty hands or you're working in an environment with some water. It's a very textured grip. - Yeah and this is a pretty well machine too. You're not going to see any sort of loose or ragged edges here. On the grips themselves, it's just a little Allen screw on top and bottom to kind of adjust the tightness so you can twist them or not twist them and get them there. - Now it's not really meant to break apart like the other systems. Once you put this together, it should hold. But they've even gone ahead and put some of the friction tape there to keep the camera from sliding around, which is a nice little touch.

- Now, Rich, they kind of appear the same but they're a little different. Check this out. Here on my system, I actually have this cut-out right here. What do you think that cut-out's for? - Well, I think it's for a poorly designed camera that put the battery in a hard to reach place. Am I right? - You are right, my friend. So here on this Blackmagic Pocket Camera, obviously that's where my battery and memory card door are and now if I put this on a traditional base plate, that's going to be kind of hard to get out without having to take the whole camera out. Well these guys thought ahead. So they put a nice little cutout here right into the sort of rail itself.

So if I go ahead and mount that on there. Give me one second to do that. - Yeah and they've just got convenient, you see on the bottom here, thumb screws that you can turn with a thumb, which is a nice addition or a notch so you can use a screwdriver. Makes it pretty comfortable. - And check this out. Hey, what do you know, it's the battery door. I can simply just open that up and now I have access to that without having to take it off the rig itself. - Now you mentioned on the earlier camera rigs that we were looking at, that they were more of a gun stock type rig, where -- - Yeah, kind of pressed against your shoulder, right? - Yeah. This is the type of rig for long shooting days and you just lock this in here and this can actually adjust based on your height.

So depending upon your arm length and everything else, you can actually unlock this and it allows you some flexibility to move that until it's in a comfortable position. - Yep. - And then you just lock it back in and what you end up with is a pretty comfortable rig. It transfers a lot of the weight. What I like here is if I just pull outward a little bit, you'll see it sort of grabbing on the back of my shoulder. It's very stable. Or I could pull and pull my arms in and it grabs that shoulder and really just lets you get a third point of contact there.

So it seems silly to be shooting a shoulder rig with a GoPro, but we've done a lot of productions with GoPro cameras and sometimes you just want all the cameras to match. So if you put the new GoPro 4 Silver that has the LCD screen built-in or you add the optional LCD screen back here, you drop this in the medium field of view, this is a great running action camera and it's really going to let you get those shots. I like this. It's comfortable and it's just enough weight that it feels stable without feeling heavy. - Now can I tell you one of my favorite features? - Yeah. - And this is going to be something that's small but really considerate to your fellow crewmembers.

- Okay. - And that is that this actual shoulder pad here can come off, so you can take this all the way off and guess what you can do with this? - Put it in the laundry machine? - You can wash it. Nobody likes a stinky camera operator and if you're in a run and gun situation, running around a lot -- - Yeah, you're outdoors shooting a concert -- - In the middle of the summertime? You can get a little funky going on here. And also this kind of leads to rashes on your neck, stuff like that, if you don't keep these clean. So that's actually a small, but very nice little feature to have. - Funky camera straps, alright.

I think this is pretty cool here. They do make these for other types of systems. It's not just for GoPros and Blackmagic Pocket Cinema Cameras, but when we reached out to them, we were like, wow, well everybody reviews DSLR rigs, let's try some rigs that are for other types of cameras and I've gotta say, just this little addition makes it so much more useful because you have a shoot, the battery life, Rob, what's the battery life on a behind camera? - I think it's like two and 1/2 minutes. - Maybe 15 to 20, it depends, but trust me, swapping that thing out all the time, unscrewing it, putting it in, doing card swaps, it's just, yeah...

- And again, like all the other companies that are making rigs these days, these guys are making tons of other accessories too. From follow focuses and monitors to all sorts of stuff. You can sort of customize these and get them as customized and bespoke as you want, so big thumbs up for these guys. I think that if you're not ready to spend big bucks on some of the higher-end systems this is definitely sort of a brand and sort of a set-up to consider, especially if hand-held and shoulder-mounted work is not work that you do every single day, these systems, bang for the buck, make a lot of sense.

- Alright, up next we're going to take a look at the primo of the premium, the Zacuto. We've got the highest-end system from them, as well as some older pieces that allow you to mix and match. We're going to walk you through the flexibility of their modular system and give you some ideas on what sort of cameras these beefier rigs could be used with.