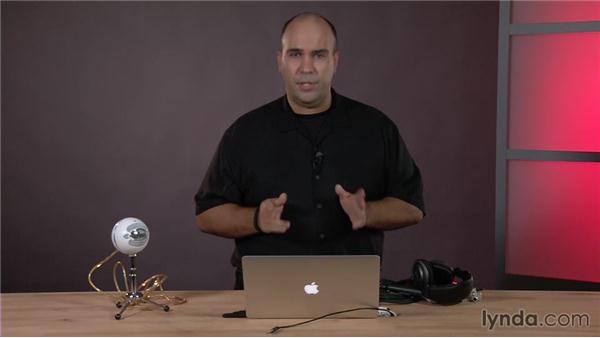 Male 1: Before you go out into the field and just start to work with a new piece of equipment, it's essential you test it. And in fact, before you change locations or start a new production day. Or leave the office, or really do anything, test your gear. You see, every time you assume that the gear is working, is when it's going to fail. I've had equipment that's worked flawlessly for weeks go bad the next day. Usually I carry spare equipment, but I can't emphasize enough, even if you're crunched on budget, always have extra gear if you can afford it, and if not, be really paranoid and test the equipment out.

Let's go ahead and test out the Zoom H4N. One of the first things I'm going to do is plug the XLR audio into the bottom. There we go. And, I recommend that you go ahead and also plug in your headphones so you can hear. I know a lot of folks who incorrectly assume that the audio gear is working just because they see the VU meter's bouncing. The VU meters can be moving and your mic can be damaged, or you can have a kink in the cable with shorting electrical frequencies. You might be picking up the local radio station and all sorts of things could be going wrong with the mic. Just seeing the VU meter moving doesn't really test good audio.

It does test that there's a solid signal coming through, but it doesn't check the quality, so plug in as well. Just go ahead and put the headphones on. And we'll plug the audio in. I see what's there. I'll check my microphone input. I've got input one selected. And I'll press the record button. This is me talking. And I can also hear my voice coming into my headset. And I easily see the VU meter moving. So that looks really good. It seems solid. I haven't actually recorded yet, but it is coming through.

It's in standby mode, and I'll press it again to engage. I see the numbers moving, and as I talk, the level meter is bouncing. It's a little bit low here since it's not coming up to negative 12, and I'm going for broadcast level, so I'll aim for negative 12. And you notice that I can adjust the volume here. That's working really well. What I don't want to do is swallow the microphone and get lots of plosive and breath sound as it brushes against my lips. So I need to lower that down a little bit, and that definitely seems to be working. I could adjust the volume and, overall, I'm pretty happy with those levels.

Now instead of talking into the mic with plosives, I'm going to talk across the mic and that's going to sound better. Notice that my voice is going across the surface of the mic. You're not a rapper, and you don't need to swallow the mic and talk into it. Nor do you want to hear all those breaths. Place the mic below and speak across the surface. And you're getting good overall audio that sounds a lot better than over modulation or heavy breathing. Now let's set this down. I'll stop that. And talk for a moment about checking the computer. If you're using a USB mic, I recommend you check it two different ways.

First off, take your microphone and place it. Now this mic is a little bit low for me standing, but when I record I'm going to be sitting. I'll take that USB connection and just plug it on in, let's free up a USB port, make that connection. There we go and as I connected that in, it lit up. Notice if I disconnect, and reconnect, you'll see the microphone lights up. Well that's good. That's the first indicator that things are working. Next, since it's a USB microphone, I'm going to need to add its hardware. Whether you're on a Mac or a Windows machine, this process is fairly similar.

You're going to take a look at your control panels. Or your system preferences. In this case, I'm working on a Mac, so I go to my system preferences and I choose Sound. All sorts of devices show up. Right now my VU meters are moving, but I'm using the internal microphone. What I need to do is make sure I choose the Blue Snowball. And you see here that the levels are coming through. I'll go ahead and put my headphones back on, and I'll plug my headphones into the computer. I'm going to be sitting when I do this, so I'll go ahead and get into the body position that I'm going to be using during the record session for just a second.

I've got good posture, and everything seems to be working. Let's position the mic to a reasonable level. Seems to be good there, and I can adjust it. I'm getting levels across there and I'm pretty happy with the overall input volume, and I'll move that microphone in. The goal is again, not that it's right in front of my mouth or that I'm breathing into in, but that it's slightly next to me. Alright, I seem to be getting good levels. One quick check that I often do is I'll just use Quicktime player. And, I'll choose File > New Audio Recording.

This comes up. Notice from the popup menu there. You could specify an input. That seems good. We'll record maximum quality. And I'll just click record. It has its own audio meters there although they're a bit faint. And the audio is recording. This is a great chance for me to talk. Now, the key here is don't just do a testing, one, two, three. Rather, talk how you would during an interview. So, ask a few fictitous questions. Can you tell me a little bit more about what you're interested in? I really found that very, very fascinating.

Tell me more. What sort of things do you see happening in your industry over the next few years? The idea here is that you do some realistic sentences and make sure that the audio is properly recorded. When that's done, you could stop recording, play it back and have a listen. Is recording, this is a great chance for me to talk. Now the key here is. Seems to be coming through just fine.