How to avoid "Can you repeat that?" 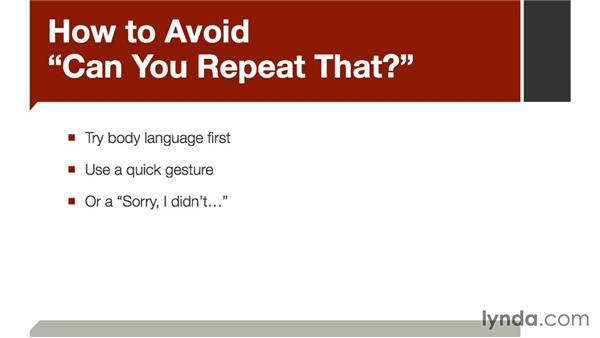 Female 1: One of my beefs is the idea of asking your subject to repeat something. I really try to avoid that at all costs. And there's a couple of ways you can do this. First of all, try body language first rather than spoken language. For example, if you lean in and look a little confused. And kind of look like you can't hear someone. Usually, they'll just go ahead and repeat what they said. It's something we naturally learn to do with one another and it's a technique you can use during an interview.

Another thing that you can do is a quick gesture, I mean, even as much as putting your hand up to your ear. This is something I do typically do when I'm outdoors. Where, in a stand up environment, might be a little more natural to do that. And again, someone will take the cue and just say it over again without even being asked. Another one of the things that I do is I just start to say I didn't hear you without actually doing it because I don't want to overlap the audio, so I'll say, sorry I. And I, they know I'm going to say I didn't say I didn't hear you, or didn't understand you.

Again, these are just natural decoding that we do in our normal daily lives that you can take advantage of when you're doing an interview. If you really have to ask them to repeat a question, see if you can get at it another way. So, what you might say is, I think I heard you talk about the event and what went on there but I'm not sure I really understood what happened at the opening session, could you just talk about that? And then they'll basically repeat what they already said and usually when people repeat something, they're much more succinct the second time, which is also going to help you minimize narration.

And finally, you want to be sure that they avoid saying, as I said before. So, one of the things I do when I'm getting somebody comfortable at the very beginning of the interview, is I'll mention to them, you know, we may address a couple points more than once. And you may repeat your answer in a couple different ways, so let's not tell anyone else we've done this more than once. That's just between us.

Video: How to avoid "Can you repeat that?"