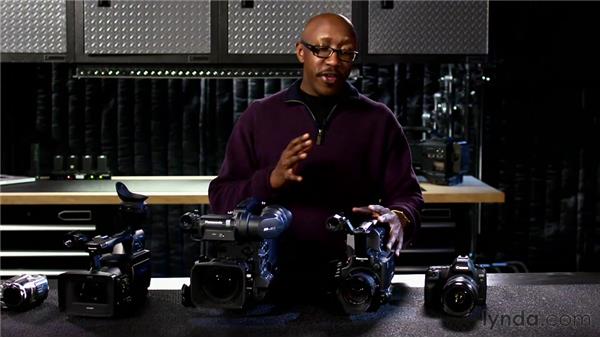 Join Anthony Q. Artis for an in-depth discussion in this video Exploring types of video cameras, part of Video Foundations: Cameras and Shooting.

The iPhone, Android, and some Nokia models are all examples of smartphones that have built-in cameras capable of shooting HD video. While these are not really suitable for most people who want to get serious about filmmaking, there is a growing set of tools and apps designed to help make smartphones perform more like full-size video cameras. In fact, there is actually an entire movement of cell phone cinema filmmakers out there. However, right now I think cell phones are probably best suited to projects like experimental films, music videos, and podcasts.

So you often can't manually adjust things like exposure, audio level, white balance and focus. Another very important difference is that they don't have XLR audio inputs for professional sound equipment and all Consumer Cameras have fixed lenses. With the digital revolution of the past decade, the line between consumer and professional cameras was completely blurred with the new class of cameras known as Prosumer Cameras. Now these are cameras that mostly have smaller form factors than the large shoulder mounted cameras used for broadcast TV and big- budget productions, but they are packed with more than enough image quality and professional features to do just about any job.

The image quality and features available at the upper end of the prosumer price range of roughly $1500 to $10,000 can often rival that of big-budget cameras that cost three times as much. Prosumer Cameras vary, but all offer full manual image control and audio control and most have XLR audio inputs. At the higher end of the scale Prosumer Cameras can also offer bigger imaging chips, interchangeable lenses and even the ability to feed timecode in and out for multi camera recording.

So when you can do all that it's really hard to classify the difference between prosumer cameras and so-called professional cameras. Okay, so I said it's hard to classify the difference between Professional Cameras and Prosumer Cameras, but the one standout difference for sure is price. Professional Video Cameras cost upwards of $ 8,000 and go well up to $50,000 and beyond. So although many features and characteristics are shared between Prosumer Cameras, there are a few things the most Professional Video Cameras have in common, the first one is size.

Pro Cameras tend to be larger and heavier than Prosumer Cameras and are typically shoulder mounted. They also have interchangeable lenses, so you can use prime lenses, swap out different zoom lenses or put on a high- end telephoto lens if you like. Professional cameras will also allow you to input timecode for multicam recording. And in general, because of the large imaging chips, superior color processing and higher quality lenses, the overall image quality is even better on Professional Cameras than on Prosumer Cameras.

Now don't get me wrong, the image quality is great on many Prosumer Cameras, but the best Prosumer Camera is like a Mercedes whereas a professional camera is more like a Ferrari or Lamborghini. So both types of cameras are high-performing, but one class offers the very highest performance. Either way I suspect you'd probably be happy to drive either one. Now there is another classic camera that I want to talk about that really blurs the line between Prosumer and Professional Cameras, and I like to call these Super-Chip Cameras.

This newest class of cameras is distinguished by three factors. First, they all have imaging chips that are much larger than traditional pro-video cameras which typically have 1/3-inch chips. Instead, Super-Chip Cameras have imaging chips that are two to three times that size. Secondly, they have interchangeable lenses. And the third distinguishing factor is the affordability of super chip cameras. So this new breed of camera is jam-packed with big chips and professional features for much more affordable prices in the $6,000 to $20,000 range.

This includes cameras like the Sony F3, the RED Camera, Canon's compact but powerful C300, and Panasonic's AF100 camera which is what we are shooting this course with right now. These new super chip cameras can do just about everything that traditional pro cameras can do, but they do it for much less cost. If they're within your budget these cameras are an excellent choice for high-end freelance work, broadcast or feature filmmaking.

Now the last class of cameras I want to discuss are DSLR Cameras. DSLR Cameras are also the new kids on the block in the world of video. DSLR stands for Digital Single Lens Reflex camera. These are basically digital photo cameras that have the added ability to shoot high quality HD video. These cameras have become widely popular in recent years, because of three outstanding characteristics common to all DSLR Cameras. First off, they had big beautiful imaging chips.

Remember, imaging chips are like negatives, the bigger the chip, the better the images. So DSLR Cameras offer superior image quality over most Prosumer Cameras. Another outstanding feature of DSLR Cameras is that they all have interchangeable lenses, which means you'll have much more creative flexibility and can use really good lenses if you can afford them. And because it's a still camera, the lenses are smaller and more affordable to buy or rent. However, the biggest factor that's led to the popularity of DSLR Cameras is their affordability.

Basically, at $1,200 to $3,000 gives a lot of cameras have doubled the image quality at half the price of a dedicated Prosumer Video Camera. Now on the surface it might seem like DSLR Cameras are automatically the way to go based on everything I just told you. However, there are also some major limitations and compromises that come with DSLR Cameras. Firstly, DSLR Cameras are still photo cameras, first and foremost so they are designed with still photos in mind and video as an afterthought.

Many very useful and important features found even on low level video cameras are missing from DSLRs. Features such as manual audio control, zebra stripe to judge exposure, peaking to judge focus, a motorized zoom control are all nonexistent in the world of DSLR Cameras. The next big shortcoming of DSLR Cameras is that they don't have XLR audio inputs that allow you to use professional mics and mixes. And the third factor that makes DSLRs tricky is that they typically have a limited recording time of about 12 minutes per clip.

Not cool if you're in the middle of shooting someone's wedding vows or the big finale of a stage show. Now there are many third-party devices and workarounds and accessories to help DSLR shooters overcome these shortcomings, but they all add more cost and complications to DSLR rigs and shooting. So you have to consider the whole package that comes along with shooting DSLR video, but DSLR Cameras aren't affordable if sometimes challenging option that have really opened up the world of filmmaking for many people.

So that's an overview of the many types of video cameras available. Now I'll be using and focusing primarily on Prosumer Cameras in this course, because that's the most popular type of camera used by digital filmmakers, event videographers, and film schools. However, most of the topics I'll be covering aren't camera specific, but instead deal with the most important factor in the quality of your films, and that is knowledge and skills that can be applied to any camera and any budget.

So regardless of your tools, the principles of focus, exposure and video storytelling are always the same. 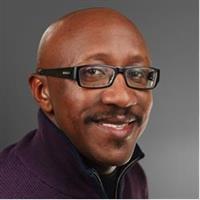 6/8/2012
Embark on the very first steps in the process of creating moving images. In this course, author Anthony Q. Artis, a veteran of the film and television industry, introduces the core ideas behind how video cameras capture moving images. The course covers foundational concepts of lighting, such as why light is important, what kinds of lights to look for, and where to put lights relative to a subject. In addition, Anthony discusses sound, an often-misunderstood aspect of video, and shows how to properly set up mics and adjust audio levels on a shoot.
Topics include: