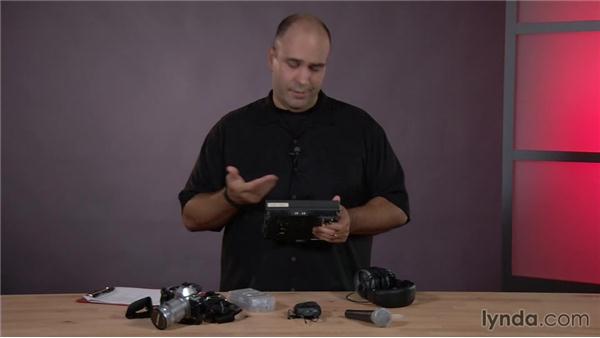 Join Amy DeLouise for an in-depth discussion in this video Essential gear, part of The Art of Video Interviews.

Male 1: The focus of our course here is on the actual interview itself, but to accomplish that interview you probably need some gear. Now chances are, as the interviewer, you might be filling the role of director or producer on the shoot. These jobs often get grouped together. And we just want to take a moment to review some of the essential gear you're going to bring. Ultimately, this should be somebody else's direct responsibility, but your job is depended upon. So, you should take a bit of ownership and make sure you're familiar with what's coming.

One of the first things I like to know is what's the camera package and how many cameras do I have? For example, having multiple angles could be useful to tell my story. If I know that we're going to get the subject as well as a reverse angle. It might affect how I design the shots. If I only have a small camera that doesn't have great low-light performance, I might need to decide what type of interview set-up I do. So, knowing the gear is going to affect how I compose my shots, and what sorts of shots I can get, which ultimately affects where you positions your interview on your subject.

Another thing to think about is the overall microphones you're going to be using. Are you going to be using hardwired or wireless microphones? Do they have wind screens? Are there any possible interferences with the subject around you for wireless microphone use? Make sure that you are familiar with the gear that you have and the type of sound it acquires, which of course leads me to my next point. These are professional head phones. The head phones that come with your phone are not. You want to make sure somebody on the crew has a pair of these on their ears at all times.

And ideally, as the interviewer, I'll often put these on so I can eliminate distractions. Now, it's a fine balance. I may wear headphones during an interview to really focus on my subject, but it could look a little weird wearing these for the person who's actually looking at you and talking. So find that balance of being able to hear versus distracting you subject. Another to think about is the audio recording device that you're going to be going to. One of the things that I like to do is have a secondary source. For example I have a zoom H4n here and this could be easily tacked on to the pro video camera to record.

This gives me a backup audio source which is always a good idea. But more importantly I could pop out the SD card put it in my laptop and I've got a MP3 that I could send on for transcription. We're going to explore the details of transcription later. But this is an essential step to great interviews. I'll often bring a client and producer monitor to see things, now the benefit of a producer monitor is it's small and I can see exactly what's happening. Now it may be out of my eyesight and I'll just glance over at it occasionally between questions. Or I can keep it on my lap and see it.

Remember it is important that you maintain eye contact, but its very reassuring to be able to see the coverage you are getting and look at it on the professional monitor whenever possible. I will often make sure as, as well that there is a larger monitor that the clients could see. What you don't want to do is put that monitor in the line of sight of your subject because they will do this. They'll stop having the conversation with you and become a deer in the headlights, staring into the monitor off-camera very awkwardly. So you're going to want to make sure that you properly position those. And we'll show you this a little bit later when we go on location.

Another thing I like to bring is a digital camera. I'll typically bring a DSLR, a micro four-thirds, some sort of camera on set, so I can go ahead and get some photos of what's happening. The benefit here is I get behind the scene image, things that can go up to Facebook, and sometimes I get some good coverage. There's also been times that the subject that the subject will pull out some great photos that they're not comfortable with us taking off set or taking back to the office to scan. worst case scenario, I can shoot a photo of a photo, and that gives me one more thing to tell my story with.

The rest of the stuff is just for comfort. Additionally, I make sure that I have my script and my talking points. I'll go ahead and put that onto a clipboard, have my copy. I'll usually make sure there's five or six more copies because people will walk off with them, schedules on there too. You just want to have everything you need. Another thing that I want to make sure of is that I have a flashlight on set. This is going to really help with low light environments. You want a safe set, and so by being able to see things, this comes in handy, or if you gotta start scouting and looking for things at that location, it never hurts to have a little extra light.

And, this is going to be good because what you don't want a surprise. I've seen people pick locations, oh, we're going to do the interview over here. And then they start putting up all the professional video lights and then they go wow, that wall is all scratched up or this looks terrible. Having a little bit of extra light to throw on a scene as you are doing your location scouts is going to come in handy. We'll explore all of this throughout today's title. And, of course, some sort of timer. Now, you don't want to be sitting there for the whole interview staring at the time. But you do need an ability to give yourself some sort of time queues.

A lot of times I'll use the time on my phone to set time queues for the shoot. If I've told the crew they've got fifteen minutes as we transition from one place to the next, I'm going to set a timer for myself, so I could provide time queues along the way. If I need to keep to a schedule so I don't miss the next interview, I need to know what time it is. So having an accurate watch that you can access, as well as a timer that you can easily set comes in handy. And, it's always a good idea to get some sense of how an interview is going. So, consider timing it, if not for your own benefit.

Most of the things on this list, as well as some of your favourite items that you want to bring, could probably fit into a single briefcase, and over-the-shoulder bag or a rolling bag. Make sure you have the tools you need so you can get the job done right.