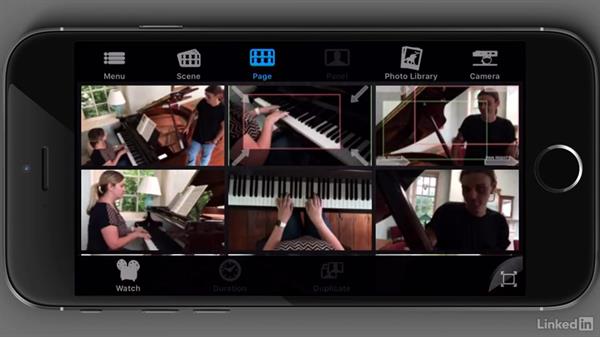 When it comes to pre-visualizing a scene, a great way to know what shots you will want to get for a scene is by creating a storyboard. What is a great app that will let you create a storyboard from your mobile device? Author Richard Harrington demonstrates how to use Cinemek Storyboard to create your storyboard while location scouting.

- When it comes to previsualizing a scene nothing beats a storyboard. Now this is a great tool for video production, but it's also a way to block out a shot list if you are shooting a photographic campaign. And Cinemek Storyboard is a wonderfully easy to use tool. What you can do is simply fire up the app and then on-location block out some of the shots that you're thinking. You can use stand-ins or, in my case, some crew members, and we just put together this different scene for a piano interlude.

And what I wanted to do is tell a short story. Now I've captured several shots into the app and I'm ready to start to lay out the storyboard. Let me show you how. From the menu when you start you can make a New Storyboard. I've already saved this and named it piano Interlude. If I tap on it you'll see that there's a series of shots that have been captured. Now you can use these shots to tell your story. You can go through and have a series of shots and sometimes you might have extras, you can also duplicate a shot here, but you can drag them to the right order.

Then we'll return to her, and that seems to be working well. Alright, so we've got the shots roughly laid out. Now once you're in a scene you can easily navigate between them using the arrows here. Let's start with our first shot. I wanna recompose a little, so I'll just drag the shot to frame it up, that looks good.

We'll go to the next shot and I'm gonna go a little bit tighter. So I'll pinch that to set it. You'll also note that you can add virtual camera moves. Now this first shot was set to a duration of three seconds, which seems about right. If I want to I could record audio describing the scene, or even sample narration. We'll go to the second shot, and in this case I'd like to create a slow creeping zoom, so I'll tap here to indicate the framing.

We'll go over here. That looks good. I'll click Done. And I'm gonna speed that up a little bit to two and 1/2 seconds. There we go. I like this one, but we'll do a lock-off, but I just wanna recompose slightly. Now if I needed to I could access my photo library and grab other images to add if needed. But as you view you start to get the idea of how it's all coming together.

Let's go into this shot here, we'll stay on this a bit longer at five seconds. And what I'd like to do is create a slow track across the keys. So we'll set those up there on her hands, select the end track state, that looks good. And we're gonna move across the keyboard. And you see, all sorts of types of movement that you can add, from dolly shots, to zooms, to tracks, to simulated pans. Now if you don't have the benefits of actors in your scene you can even add virtual people.

You see the ability to drop them in, you could change it to a Profile for different directions, pretty simple. And just switch the gender even. Now this is not elaborate, but it does allow you the benefit of placing other background players, or folks in the scene. In this case I'll just remove that. Looks good there, a little tighter. Step on over. And for this one I wanna do a slow move in. There we go, we'll go into the sheet music that she's playing.

Actually let's reverse that to a dolly out, so it pulls out from the sheet music to reveal our subject. And we'll set that to a four second duration. Now you get the idea as you have the ability to move through here just how much you can do. You get a lot of flexibility in telling your story. And you can step through all the shots and assign any duration or information that's needed. There we go. When done feel free to go back and view the Page view.

If you want a little more space you can tap there just to see all the thumbnails. And that starts to tell the story. Now I can continue through this, but you get the general idea on how the tool works. Additionally, you have some great controls here. For example, you can choose to export this. Now from the menu button here I can choose to make a PDF. This is gonna give me the option to email this. I can send this as a link, or as direct attachment.

There it is. And I'll send this on to my business partner back at the office for the scene. There we go. And now it's queued in your email application. Additionally, you can even export a movie. And this will generate and actually render out the storyboard. If you want you can password protect it.

With this app, which is not a cheap app, you're able to actually get some cloud storage to make it easier to collaborate with people on those movies. Now in this case I'm not fast enough to the internet, we're a little bit remote on this shoot location, but I can easily do that later when we get back to the main office or to the hotel for the evening. If you want you can also watch this back, and you'll see that the exact timing of the shots that you've set is there, and any camera moves that you've designed will actually come across and tell the story.

The benefit of a storyboard is it helps convey the ideas that are in your head to other people. Maybe you're working with an art director or a potential client and you just wanna show them the thoughts of the location, or where you wanna put people. You can use stand-ins or even virtual folks within the app to quickly mock out your scenes and block things out. Plus the ability to record audio, add notation, generate a PDF, or a QuickTime movie means that your ideas can be accurately conveyed to others.

10/4/2016
Sure, your smartphone can take photos and videos. But it's also a powerful, pocket-sized computer that can help you plan projects that you're doing with "real" gear. There are apps that help you do location scouting, determine sunrise and sunset times, create storyboards, generate model releases, and much more.

In this course, photographer, video producer, and educator Rich Harrington takes you on a tour of the kinds of apps that can streamline photo and video projects of all kinds. Review different iOS and Android apps to simplify your entire production, from planning shoots remotely to recording audio on set.
Topics include: