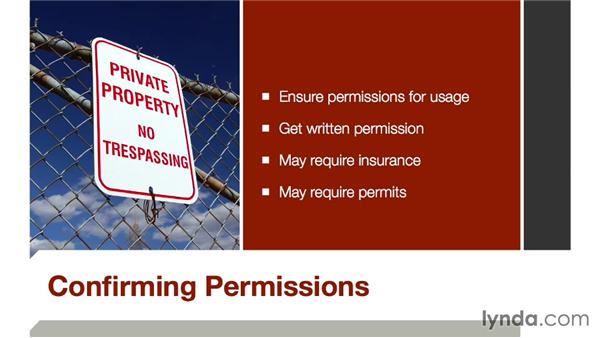 Female 1: One of the most important things you can do before an interview is confirm your permissions. Male 1: Yeah, you need to make sure that all of your assumptions are actually true. And what tends to happen is if you're organized, you've done all this pre-production upfront. But that could have been weeks or months ago. And there is a certain reassurance of reaching out a day or two before the shoot, and making sure that they're actually expecting you to be there. Female 1: It's true. You want to get written permission, even if that just means an email confirmation that you're allowed to be there. Because you might have to show that to somebody else in the building who's not really involved in your shoot.

Male 1: Yeah. And there's times that even written permission isn't enough. For example, I had to do a time lapse shoot once, and we had written. Permission. We needed access to a university very early in the morning. Before the security gates opened and we had on-letter head permission. Well, the security guard still wasn't letting us in. For some reason, he decided that we were a threat and we shouldn't be there. I had the client's contact information. And I had said to them in advance. If I have any problems, where can I reach you at 4:30 in the morning when I have to do this shot? They weren't thrilled about giving me their phone number but we had to actually call it.

Female 1: It's true. You have to have everybody's cell phone numbers and remind them the night before the shoot or the day before that you might need to call them. So to please leave their phones on. While you're in the load-in phase if they're not going to be on site with you. Male 1: And a lot of places are going to require certain things that you provide. Proof that it's safe for you to be there. This'll typically be things like insurance and permits. Now, many folks have never faced this problem before, but if you have a production company. You probably need to have an insurance agent who provides production insurance.

This is going to cover things like crew injuries as well as damage to the set. And if you don't have this, you may be blocked particularly from venues that are either public or things like hotels or convention centers, they just won't let you shoot. Female 1: And I'll tell you, it's really important to have that. I recently went to interview somebody in a multi-million dollar Beverly Hills home that was entirely covered with white carpeting. Male 1: Wow Female 1: You can imagine how frightened I was. Male 1: Yeah, that could be very, very stressful. So knowing that you have this, you have this coverage both, gives you peace of mind.

And tells you what to do if something goes wrong. Now with all of these things, there is the very real world situation where you may find yourself. Having to break the rules. I always carry insurance. I always make sure I'm not putting my crew, my gear, myself at risk. But there are times despite all efforts we haven't been able to get that completely official permission. We've contacted weeks in advance the parks department to get permission to shoot in the park. We filed the permit. We keep calling but that persons been on vacation or leave for two weeks and we don't have that piece of paper.

I will just admit that there are times, you sometimes have to break the rules. I'm sure you've occasionally faced that. Female 1: Who, me? Male 1: Yes. Female 1: Never. Male 1: Never. Female 1: Never. Male 1: So you want to make sure that if you're breaking the rules, you know you're breaking the rules. And that you have, well let's just say plausible deniability. I filed the permit, sounds a lot better than, what permit, I don't need a permit. So, it all comes down to just making sure you have permission or as close to permission as you're going to get for that shoot.