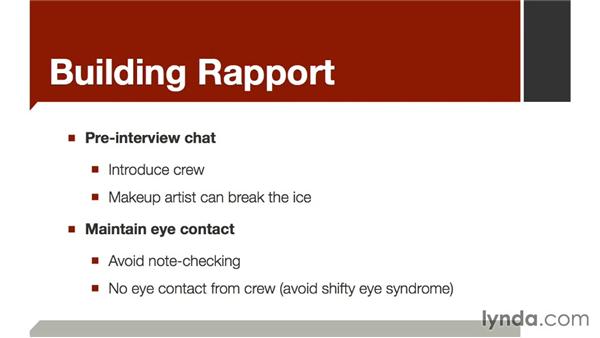 Join Amy DeLouise for an in-depth discussion in this video Building rapport, part of The Art of Video Interviews.

Amy: Building rapport is about the most important thing you can do on an interview. That's because you've obviously gotta have a great relationship with your subject to get what you need. Don't you think? Rich: Absolutely. And the thing that's a bit difficult, is that people don't always realize how uncomfortable it is for the person on the other end. So, I think you really should start this from the very beginning. Really even at the point when you first introduce the crew. Make sure that everybody is treated as a person on the set. Now, if it's a large production, you don't have to run the person through the big list and draw attention to just how many bodies are.

They probably don't care who's running craft services. But introduce them to the director of photography, the audio engineer, anybody else who's on set that's going to be interacting to them. Make them understand what's happening and just let them know that these are all people there trying to make them look their best. And you can also rely upon the makeup artist if you have one. This is one of the greatest ways to sort of ease people into, it as they're sitting down for their initial makeup. They could have a conversation, they could ask a few questions. But I generally find this is a good way to ease them in. One of the things that I often do, is sort of introduce them to people in stages.

So, as we're first having our pre-conversation, I might have the producer come over or an assistant producer come over. Or that's a great time to introduce them to the audio engineers, they, they get their microphone on. Amy: Right. And then I introduce the DP as they're getting seated and say, this is the guy or this is the woman who is going to make you look fantastic. Rich: Right. Amy: And so, and so on. So, we just kind of bring them in gradually. Rich: And then, during your interview, it's really important that you maintain proper eye contact. And this can be really tough. I know that, you know, you have these interview questions, you have all these notes, it's the schedule.

You kind of have to choose to zone out your focus. When I'm in the middle of an interview, I will often ask another crewmember to keep track of time. And so if I'm running the interview too long, or I'm getting late. I always say look if we're within our five minute window of when we talked about wrapping up the interview. Gently touch me on the shoulder. Don't draw attention to it. Don't make some big comment. Just let me know that we're getting near the end of our window. And, Amy, I'm sure you have some other advice on how to make sure that the person is paying attention and looking where they need to look. Amy: Right. I actually have a, kind of a point of pride.

I never look at my notes. I have a running list for myself of all the shoots I've done of interviews. And it's been five years since the last time I had to look down at my notes. And it's kind of a point of pride with me that I really have to memorize that whole story arc which we're going to talk about in a little bit. So, I want to keep that eye contact. I want to have that person really engaged with me because the more we're engaged in a conversation. The less they're going to think about all the equipment around. Rich: And, speaking of eye contact and maintaining it.

If there's a lot of bodies on set, the natural thing to do for the person, because most of the people in the middle of an interview. If you really think about it, they have a psychological need for approval. So, they're going to look to you. And if you're smiling, and actively engaged, they're going to be looking back at you. But, if you're not giving them good feedback, or even if you are, they're going to start talking to everyone on set. Or if they do a lot of public speaking, they're going to be making eye contact all around the room. So, I think you sometimes have to tell the crew, when we're rolling, could you just look away, pretend that the person's not there.

Look at your monitor, look at the eye cup. Amy: I've had to tell DPs to look at their feet. Which, it really annoys them. So I say, if you want to put your confidence monitor down on the floor, be my guest, but I don't want you making eye contact with my guest. Rich: And a real simple trick here, is a lot of cameras, have flip-out viewfinders. So, by simply turning that, and putting it flat against the side of the camera. It's very easy for the DP to stand next to their camera, rather than behind the camera. And that'll keep your subject from looking up and down and all around. They will just look at the interviewer, and they'll maintain good eye contact.

So, one of the things is, is that, you know, you want to really get them to feel confident upfront. So, you don't launch with your hardest question, right? Amy: No, absolutely not, in fact what I try to do is ask them a couple of things that are just total softballs. You know, how they got involved in their business. Or you know, something that's their favorite thing to talk about. So, that they're just kind of, warmed up for the really tricky questions to come. Rich: And sometimes if I have enough time with an interview subject and I can tell that they're a bit nervous. I'll ask them about something that has nothing to do with the interview at hand. I'll just say, when's the last time you went on vacation? You know, oh, I see you have kids.

You know, you can see, you see the photos in their office or. You know, when's the last time you went on vacation? I'm looking for some new ideas. And they'll start talking about something that they like, that they really enjoyed. Or where's the best, you know, what's your favorite restaurant? I'm looking for a new place to take my spouse to this weekend. You know, you get some ideas, they're talking about something that's. Completely throwaway, but they know it, because it's their favorite thing, and all of a sudden, they see you as a person. Amy: One of the things I also do, is I save my kind of hardest, or top questions, the most important questions for about the middle of the interview.

It's the height of the story arc, which we're going to talk about, but also, it's about the time, when they're the most warmed up. The only exception I would make to that is with a much older person. And this really depends on the person themselves, but if they are in poor health, or they're just not feeling well. It could even be a very young person who's in the hospital. Then I actually have to flip it and put the more important questions early on to be sure I get them before they get tired. Rich: And, really at the end of the day, what this boils down to is that you are being friendly and professional. One of the best jobs I ever had to prepare me to be an interviewer was actually, bartender.

And, you have to remember that you are essentially performing. You are there to bring the best performance out in them, so. While your sitting there listening, you have to be smiling and engaged. You have to feel like you are on a date with this person. A very first date, and they are interested, and you are interested in each other, and you're actively listening.