Attaching a motor to your slider 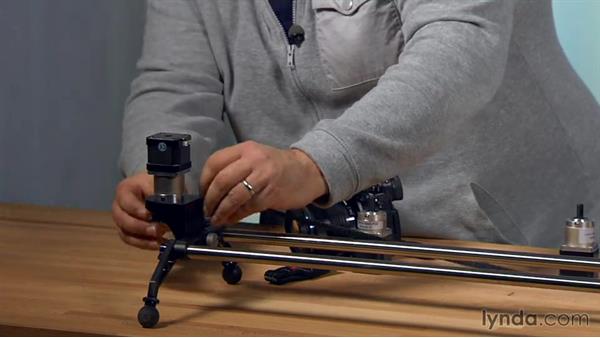 - So Rich, we talked about some basic rail setups, but we just all of the sudden got a lot more stuff on the desk. What's going on here? - Yeah well, this all fits in one bag, believe it or not. But it is a bag that will hold everything I need for shooting time lapse. So I actually took this system out into Valley of Fire recently, put it through the trial by fire, and it held up well. I shot for 10 days on this slider. - That's cool. - And it worked fantastic, so I wanted to walk through the process. But, you mentioned motorized. - Yeah. - There's a couple of different motors here, and why do I have multiple motors, Rob? - Well, you're going to have different torque for what you're depending and what you're trying to do.

If you're, you know, doing time lapse you might have one motor with a little less torque so you can kind of move, stop, move, stop and have some memory involved there. Or if you're doing video where you want constant motion, you're going to have a motor with a little bit more torque on it. And the thing about, sort of, motorized sliders, in my opinion, that's kind of where it's at. - Yeah. - I mean, yeah, you can do the hand manual movement or you can do the hand crank or pushing it, but when it comes to a nice, constant movement, you're not going to get better than motorized. And as you step up through the various, sort of, calibers of motorized sliders, you're going to get a whole lot, a whole lot of options, not just from the movement left and right.

- Yeah. - Obviously that's where the motor really comes in, but you're going to get motorized panning heads, things of that nature, that really give you, for time lapse and video work, just an immense amount of flexibility and sort of, uniqueness to your shots. - Well you nailed it, Rob. We're going to build out a three-axis system here, where there's three different types of movement: the ability to go side-to-side, the ability to pan, and the ability to tilt. But why don't you go ahead and attach that motor at that end. - Yeah, and so this is just a, sort of, adapter that attaches to the rod, and this is the actual motor itself. And you can see I actually have some other motors here. - Yeah. - This works pretty easily.

- One's the video one. One is the one that does shoot, step, move, which is essential when putting together something for time lapse productions where you want those micro movements. This is the time lapse motor he's attaching, which is going to have a lot of ability to do a very small movement, which is great. Now, that's attached. And you see there, Rob, how there's sort of, holes in the side? - Yep. - This is the gear teeth, just like you saw on the Kessler. So why don't you take that through, and loop it around. And on the other side, I've just got a geared wheel here, so that it can make a complete loop.

So I'll just take that and attach it down here. Always a good idea to lightly tighten, not overtighten anything-- - Right. - Firm, but not locked, because you want to be able to take this system apart. - Absolutely. - Now, in this case, there is another unit that sort of, falls in between. This is going to hold this-- - The cabling. - Thing together, yeah. So, I just take this and attach it to the unit. There's a thread on the bottom.

Let me turn that around so it's facing the camera so they can see it. Normally, I would put it on my side so it's easier to see. And I thread that down, and this just creates a channel for this to go through. So if we take the belt, we can pass that through. - And just make sure you don't twist it or get it turned around. - Yeah. Yep, there we go. And I loop that around, and then I'll slide this down here and connect. So, there's essentially a geared system here, Rob. I just stick that-- - Yep. - So it's connecting.

- And then just tighten it down. - Tighten it down, and it locks it in place. - And then you do the exact same thing on the other side. - Yep. And we'll just feed that through. I can take this back on my end. Now, I gotta be careful here. Notice I actually fed too much in initially, so you want to sort of, split the balance. Get that on there, in both cases. So I'll lock the one down. It is possible to feed it in too far-- - Yep. - And get it so one side locks, and then the other side. And you want this pretty snug. - Yeah. - You don't want to really, overtighten.

- Because if you have too much slack in there, it's obviously going to not work all that well and pull, and you'll get some bouncing around. - Yeah, a lot of times we're going to actually set the slider up at an incline, going up a system. So if there's too much play in here, it could actually slip. So it's a good idea to get that belt nice and tight. Now once you've done that, don't pull this because you actually have a motor here and you could strip it. So, leave it in place. Call that good. Now, we've got that built. We got the motor. We got this. I think the next thing is to attach the controller that will put it all into play.

Video: Attaching a motor to your slider