Creating a series of numbers or dates 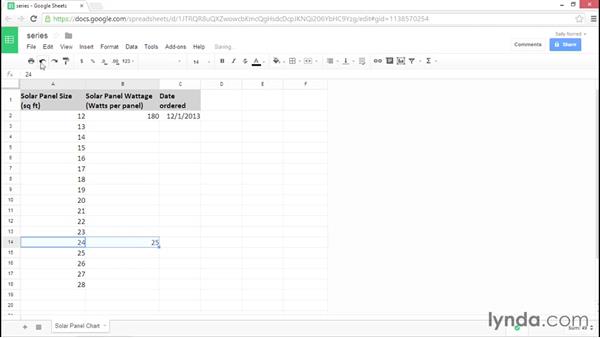 If you're entering a list of ordered numbers or dates into a single column or row, using quick entry tricks for creating these series will save you time and minimize errors. I'll use this Solar Panel Chart to show you how these quick data entry tips work. First, I'll show you a quick way to create a column of numbers that increases or decreases by one in each row. Let's say that I want to create a list of numbers that increment by 1, starting with the number 12, in the Solar Panel Size column. First, I need to enter at least two instances of the series.

So I'll type the number 13 in the next cell in the column. Then I'll select both cells that contain the series I want to continue. I'll hover over the bottom-right corner of the bottom cell, where I see that tiny blue square, until my cursor turns in to a large plus sign. Once my cursor turns in to that plus sign, I'll click and drag down the column as many rows as I'd like the number series to repeat. I'll stop at row 18. This works the same way with a number series in a row. To create a number series in a row, enter at least two instances of the series. I'll create a row series starting with the number 24 in cell A14.

I'll enter 25 in cell B14. Select both cells. Hover over the bottom-right corner of the last cell until you see that plus sign, and drag to create an incremental series in the row. You can also create a series of numbers that increase or decrease by a custom incremental value. I'll clear this series and show you how. Let's say I want to create a custom number series starting with the number 180 that increments by four in each row. I've entered the first number in the series, 180, in cell B2.

One cell below this one, I'll enter a formula. I'll type in equals B2 plus 4. The B2 represents the value that I've already entered into cell B2. And the 4 represents the value that I'd like to increase the series by in each row. I'll press Enter. You'll see that the next cell displays the number that is four more than the previous cell. Let's select that cell again, and let's hover over that small blue square until we see that plus sign. I'll drag my mouse down to create a series using this formula.

When you release your mouse, the cells you selected will fill in with the custom series you created. You could also decrease the numbers in a series by replacing the plus sign in the formula with the minus sign. You can enter a series of dates in a column or row using a similar method. Enter at least two in the series. I'll enter 12/1/2013 and 12/2/2013 in the first two rows. Select both cells. Hover in the bottom right corner until you see the plus sign. And drag down the column to add the date series. 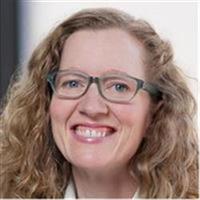 8/26/2014
Google Sheets is a feature-rich, cloud-based spreadsheet application that allows you to format and analyze all kinds of data. In this course, author Sally Norred shows you how to get the most from Google Sheets. Discover how to get around the interface, enter and work with data, and use formatting and function features, and learn smart ways to make your data work for you. Plus, see how to work with your spreadsheet data on the go with the Google Sheets mobile app.
Topics include:

A: We revised five videos to reflect the latest features and enhancements in Google Sheets.

A: New videos were added that cover customizing your printed spreadsheet and automating tasks with recorded macros.

Video: Creating a series of numbers or dates