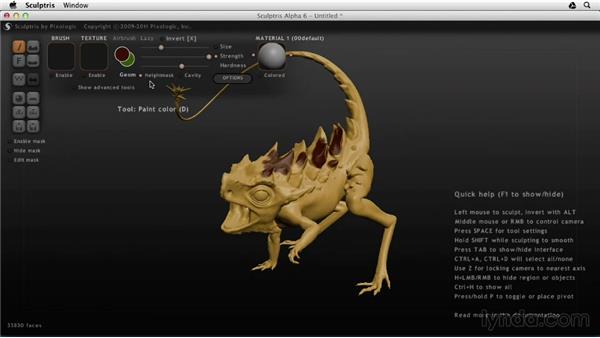 Painting in Sculptris is generally not as advanced as painting in ZBrush or Mudbox. It's meant for sketching with color more than it is for creating finished quality texture maps. However, there are still some very cool things that you can do with it that you can't even do in much more advanced software. Add to that the fact that by being less advanced, it's also less complicated. You can just get down a business with painting color in Sculptris without having to learn a lot of controls. Let's see how it works.

Once you bring a model into Sculptris, it's going to look like it's covered in gray checkerboard. This simply means that there is no color yet; it's a blank canvas. So let's fill the whole thing with a color. I'm going to pick a color from our swatches here and let's make it kind of a sandy brown. So I'm going to decrease the saturation here and let's see, let's pick something that's a little bit more like a brown. A little bit lighter, okay that's good, and click OK.

Now let's click the Fill button or hit Ctrl+ F to fill the entire model with that color. Now, let's change the color to a brick red, maybe a little bit higher saturation, a little bit more reddish, and okay. So we've got the Paintbrush Mode activated; hit D on the keyboard if it's not active. Now you can just simply paint with the paintbrush. You can also pick an alternate color to paint with.

The paintbrush behaves pretty much just like you'd expect. You can change the size and the strength just like in sculpting brushes. So go ahead and paint all of these bony plates with this brick red color. It could take a little bit of time, so I'll just let you do that on your own. One setting that can make this easier is the Heightmask. With this setting turned on, Sculptris will only paint on the raised parts of the model. So now we don't have to be so careful about where we paint because Sculptris is only going to paint on the areas that are raised up.

One thing that I like to do is to use just a darker version of the color so it looks kind of like it's in shadow. So actually let's change our color to kind of that sandy brown, except just a darker version of it, and click OK. So I'm just going to zoom in a little bit closer here and let's change our angle a little bit. So now I'm painting with the Cavity mode and the Heightmask, and just simply painting shadowy areas.

One last thing about painting: you can use Hiding, just like in Sculpting Mode, to make it easier to paint on just the objects that you want to paint. So I'm going to hold down H and click on the dewhopper's body. Now we can fill with white to fill just the parts that are visible and not worry about changing the color on the hidden parts. So for example, we could come into the eyeballs and we could paint them a specific color, without worrying about painting on the rest of the eyelids of the dewhopper.

Actually I want to turn off Cavity Mode here and Heightmask. Now with the dewhopper hidden, we can paint on the eyeballs without worrying about painting the eyelids as well. And actually you might notice that this kind of looks like it's in Symmetry Mode. This is actually because both the eyeballs are occupying the same part of the UV Map. Basically it means if you paint on one of the eyeballs, the other eyeball is going to get the same painting. Alright, go ahead and hit Ctrl +H to bring everything back.

So that's the basics of painting color in Sculptris. There are no fancy paintbrushes or blending modes like you might find in other programs, but as far as something that just lets you jump in and start trying out different color ideas, Sculptris works great.

3/6/2013
Sculptris is a free sculpting program made for artists. In this course, author Ryan Kittleson introduces the technology behind Sculptris, covers the sculpting toolset, and finishes with two hands-on sculpting projects, where he blocks and sculpts a concept vehicle and a character with facial detail, hair, and clothing.
Topics include: