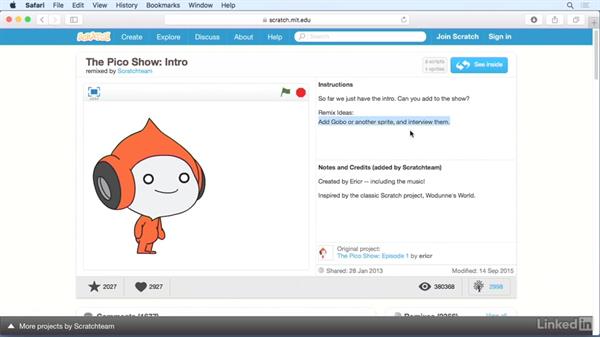 Scratch is a tool developed by students at MIT, meant to teach kids how to understand programming concepts and how to express their creativity in the digital realm. In this movie, see where you can find Scratch and some examples of what types of projects can be created in Scratch- including games, interactive stories, and digital toys.

- [Voiceover] So, what is Scratch?…Scratch, in short, is a tool to help you develop Apps…without having to write any code.…Those Apps can be animations, games,…interactive stories, or digital tools.…Let's look at some examples.…I'm going to click the see examples button here…and then I'm going to head over to…The Pico Show: Intro under Animation.…Now, this animation is going to show a character…talk using a talk bubble, animate around,…play sound, and change colors,…so to start the animation, you can either click…the green flag here or up here,…so I'm going to click the green flag and start,…and there's the character with the talk bubbles,…and then the animation will continue and play sounds.…

(upbeat techno music)…So that's one type of a project…that you could create with Scratch.…It's also important to note that when you…create a Scratch project, you can actually share it…on the Scratch website and other Scratch users…can take and do what is called remixing…to take your project and change it.…Now that doesn't change your original project,…

Video: What is Scratch?