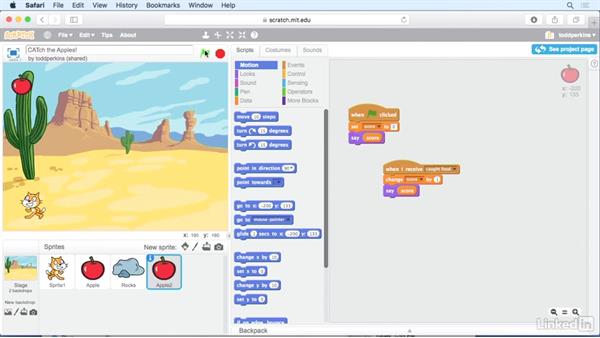 - [Voiceover] Now what we're going to do is take what we've learned in this course so far and apply it to build a game. You can look at the scripts of the game on my screen. I have a cat sprite, an apple sprite, some rocks, and then an apple too that's going to display the score. So, I'm going to run the app, and I'm going to use the keyboard to control the cat and try to catch the apples and dodge the rocks. - [Voiceover] Yum, yum, yum, yum, yum! Yum, yum! - [Voiceover] So, the game can detect when the cat catches an apple, and that increments the score.

And the game can also detect when the cat gets hit by a rock, which stops the game. So, with that said, let's build it!