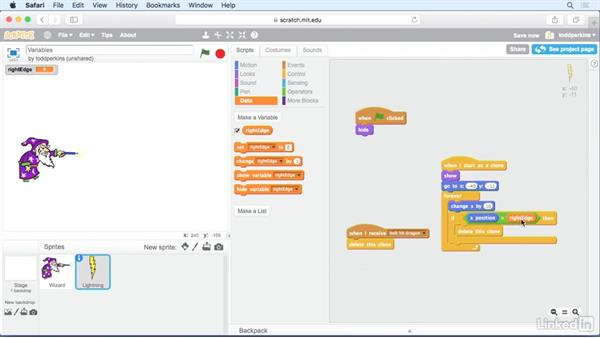 Variables allow you to save data values in Scratch. You can save a player's score in a game, a user's name, or just about any text or numeric data that you would need to develop your Scratch projects. In this movie, see what variables are and how to use the Variables scripts in Scratch to add variables to your Scratch creations. Also see how to use and modify your variables' values.

- [Voiceover] Variables allow you to save certain values…so that you can recycle those values…or keep track of them later on.…Think of a variable like a user's score in a game.…It's a saved number value…that goes up when the user gains points.…That's how variables work in code.…And that's the basics of how a variable works…in Scratch.…So let's go over to the Data section…and this is where you're going to find the option…to create a variable.…

Imagine the wizard shooting lightning bolts…and he's also shooting fireballs…or ice cubes…or whatever else,…and you wanna make sure that whenever…any of those objects hits the right edge of the screen…