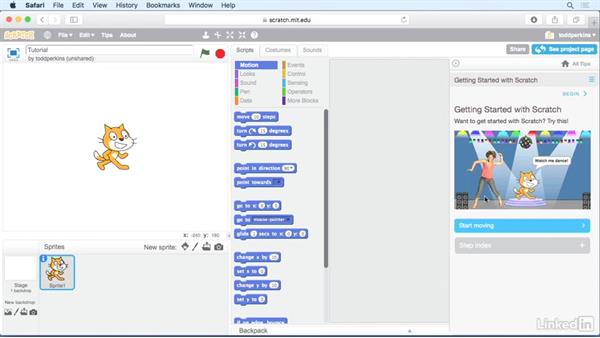 Scratch has built-in tools for learning how to develop content in Scratch. Using these tools, you can see how to make simple animations, games, interactive stories, and several other types of projects. You'll also find sections that explain every part of the Scratch interface, including how to use all the scripts. In this movie, you'll see where to find the Tips section in Scratch.

- [Voiceover] One of the features that I really like about…Scratch is that it's easy to get help…to figure out how to do things on your own.…One of the ways to do that is by…using this button at the top of the screen.…So it says Block Help and if I click on that…and then I click on the stage, for example,…then I see the Project Editor Map in here…that explains the stage and how it's organized…and what the different areas are called.…You also see the cursor tools to duplicate and delete,…grow, shrink and get tips.…

Now in this Help panel right here,…you can actually click this Home button…to go to All Tips, and if it's closed ever,…you can access it by using that question mark…or you can click the question mark all the way…on the right side of the screen…to open it up as well.…So from here you just click that Home button…where it says All Tips and then we have…these different categories:…Step-by-Step, How To and Blocks.…So if you need any kind of information…about how to do something in scratch,…I recommend starting with Step-by-Step.…