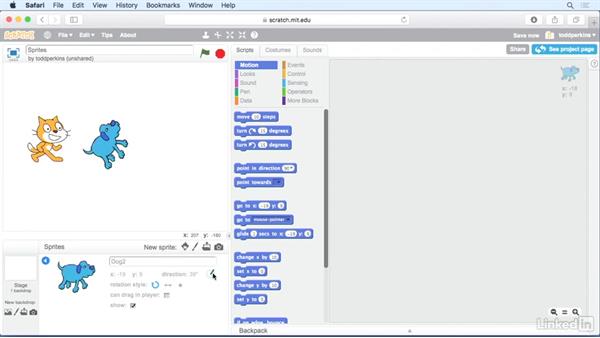 Sprites are graphics, or characters in your Scratch creations. They can be still pieces of artwork, or they can be animated, or made interactive to respond to mouse clicks and key presses. This movie demonstrates what Sprites are, and how to create them in Scratch. Like backdrops, Sprites can be created in Scratch, uploaded from your computer, or drawn within the Scratch interface.

- [Voiceover] In a game,…a sprite is a graphical asset.…It's an image…just like this cat that we have on the screen.…We can add new sprites in Scratch…using the buttons over.…So we have the sprites list right here…and this is going to list all the sprites…that are in our app.…And if we wanna add a new one,…we can add one from the library,…we can paint a new sprite,…we can grab one from a file on our computer,…or we can use our camera.…Now these options may look similar…because they are the exact same options…that we looked at…when we looked at making a backdrop.…

But let's look at adding a new sprite…from the library.…So I'm going to click this button right here…and the library pops up.…And there's even more sprites built into Scratch…than there are backdrops.…If you want to sort it,…you can click Animals, for example,…and you can choose an animal…that you'd like to have in your app.…So I'll go with Dog2 right here.…And I'm going to click OK.…Now I have a dog and a cat.…And I can click and drag them around,…move them however I would like.…