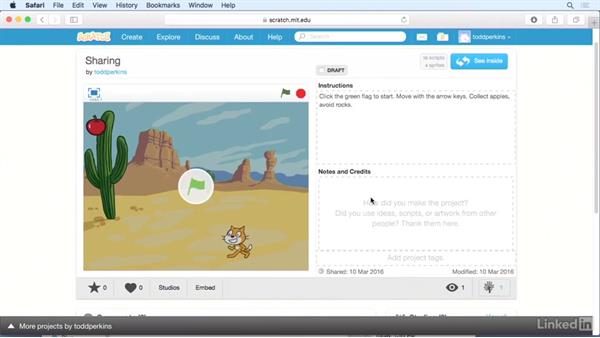 When you're done with your game or other Scratch creation, Scratch gives you the option to share it with the world. This movie shows the basics of sharing your creations with the Scratch community (Scratchers), and how to add search key words and a title and description to your project so people can find it.

- [Voiceover] So, the game we've created is done.…Let's say you've made a project of your own…and you're ready to share it with the world.…You can share it by simply clicking…the share button at the top right of the screen.…When you click the share button,…you're taken to a page where you can add instructions,…including how to use your project.…So, here I can put,…"Click the green flag to start.…"Move with the arrow keys.…

"Collect apples.…"Avoid rocks."…Then you can add notes and credits,…if you want there.…I'll put, "Created by."…I'll put my name there…and then you can add project tags.…Art, cats,…apples, and we're actually…only allowed three tags at this point.…So, I'm going to have those three tags…and if you wanted to remove them,…you can always click the X button…and add a new tag if you want.…

And that's it.…If you want to allow commenting,…you just simply don't check this box…that says turn off commenting.…People can comment on your projects.…Other people can take it, they can remix it.…If you wanna get some remix ideas,…